The Low-FODMAP Diet – Helpful or Hurtful? 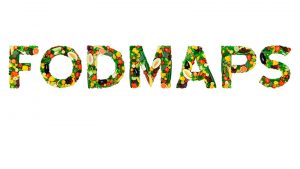 The low-FODMAP diet:  an unusual name for a complicated diet. People seem to be talking more and more about it. But what is it? Would it help you? And what in the world is a FODMAP, anyway?
This article will explain, in simple terms, what the low-FODMAP diet is, and who it may – and may not – be helpful for.
What is a FODMAP?
The term FODMAP is an acronym for Fermentable Oligo-, Di- and Mono-saccharides, And Polyols. (All clear now, right?) Basically, these are a lot of big scientific words to describe types of carbohydrates that are in many of the foods we eat.
Let’s break down the acronym:
First of all, saccharide is simply a complicated name for sugar. Here we are talking about sugars that come from the foods that we eat. Saccharides are the sugar units of carbohydrates. Whether coming from grains, dairy or fruits, carbohydrates are broken down during digestion into simpler sugar molecules.
The prefixes mono-, di-, and oligo- simply refer to the chemical structure of the sugars. Monosaccharides have the simplest structure. Glucose is a monosaccharide found in many foods, and especially in fruits. Fructose, another monosaccharide, is a sugar in honey, many fruits, and high fructose corn syrup.
Disaccharides are formed when two monosaccharides are combined. Sucrose (table sugar) and lactose (a sugar in milk) are disaccharides.
Oligosaccharides are composed of many monosaccharides put together. Glycogen, which is the storage form of glucose in our bodies, is an oligosaccharide.
Polyols are slightly different. They are sugar alcohols. Sugar alcohols are substances derived from sugars. They do not contain alcohol in the traditional sense, but rather have similarities in terms of their chemical structure.
Polyols occur naturally in many fruits and vegetables, including apples, apricots, nectarines, plums, mushrooms, and cauliflower. In addition, artificially-made sugar alcohols are added to many processed foods. Sorbitol and mannitol are two commonly used polyols, often found in “sugar-free” foods, chewing gums, and toothpastes.
The bottom line:
FODMAP is an acronym referring to a group of commonly occurring sugars and sugar-like substances. Most FODMAPs are naturally occurring in foods, while some are artificial substances used as sugar substitutes.
What Foods Contain FODMAPs?
FODMAPs are naturally present in a wide variety of foods. They are in many fruits, vegetables, grains, dairy, legumes and nuts.
In recent decades they have also been used as food additives in foods and drinks that contain high-fructose corn syrup and other artificial sweeteners. Because of this, many people consume a lot more high-FODMAP foods and drinks than they did in years past, before processed foods were so prevalent.
Foods high in FODMAPs

Adapted from University of Virginia Digestive Health Center
The Bottom Line:
Most FODMAPs are naturally occurring substances found in many foods that we eat. Other FODMAPs are food additives, commonly used as sweeteners.
Why would anyone want to follow a low-FODMAP diet?
A low-FODMAP diet, as the name suggests, is a diet that completely (or nearly completely) eliminates all foods containing FODMAPs. As you can guess by looking at the list of FODMAP-containing foods, this diet involves cutting out a lot of foods and beverages.
The reason some people look to a low-FODMAP diet has to do with the way that FODMAPs are digested.
Most carbohydrates are digested and absorbed in the small intestine. However, some are not well-absorbed there, and instead travel on to the large intestine.
In the large intestine, they are broken down (fermented) by bacteria that reside in our guts. This is a normal and healthy process. The bacteria in our intestines (microbiota) play an important role in our health by influencing our metabolism and immune system (1).
FODMAPS fall into this group of carbohydrates that are poorly absorbed in the small intestine and are instead fermented by the microbiota in the large intestine.
For most people, fermentation of FODMAPs does not cause any negative issues. However, FODMAPs are “osmotically active,” meaning that when there is a large concentration of FODMAPs, water will follow them to try to dilute them. As a result, some people experience fluid-buildup in the small intestine when a lot of FODMAPs are eaten. This can cause uncomfortable bloating, because the small intestine is essentially being stretched by an overabundance of fluid.
In addition, FODMAPs are fermented rapidly in the large intestine, and gas is created as a result. In some people, this gas production causes distention of the colon, along with pain and bloating.
Again, most people do not experience any negative effects from eating foods containing FODMAPs. In people with IBS, however, FODMAPs often do seem to aggravate symptoms.
A diet low in FODMAPs, therefore, has been looked at as a way to relieve intestinal discomfort in people with IBS. For many of these patients, limiting FODMAPs significantly relieves symptoms (2, 3).
Researchers have suggested that as many as 86% of patients with IBS experience improvement in their symptoms when following a low-FODMAP diet (3).
IBS patients on low-FODMAP diets report:

While a low-FODMAP diet is helpful for many IBS suffers, it is not a sure thing. Some people do not experience improved symptoms with the diet. Researchers are not sure why this is the case.
The diet can also be quite a challenge to follow. As you will notice from the extensive list of high FODMAP foods above, they are in a LOT of the foods that we commonly eat.
And, to the casual consumer, there seems to be no rhyme or reason as to which foods contain FODMAPs. Attempting to avoid all of the foods that naturally contain FODMAPS, or that have FODMAPs added to them, presents quite a grocery-shopping challenge.
The bottom line:
For patients with Irritable Bowel Syndrome, the low-FODMAP diet often offers some relief from symptoms.
Could a low-FODMAP diet be helpful for someone without IBS?
One study compared gastrointestinal symptoms in IBS patients to those without IBS, on both a low-FODMAP and regular diets (4). While up to 70% of IBS patients on the low-FODMAP diet reported fewer symptoms, the low-FODMAP diet did nothing for people without IBS. People without IBS did not report feeling any differently on the low-FODMAP diet, as compared to the regular diet.
The bottom Line:
There is no evidence that a low-FODMAP provides any benefit to people who do not suffer from IBS.
Potential downsides of a low-FODMAP diet
Even in people for whom the diet is helpful, it is important to limit as few foods as possible.
For people wanting to try a low-FODMAP diet, dietitians typically recommend excluding all foods containing FODMAPs for 6-8 weeks. After that period, hopefully symptoms have improved. At that point, they recommend gradually re-introducing foods that contain FODMAPs. Foods can be re-introduced one at a time, paying attention to whether they cause adverse symptoms. Any foods that do not cause symptoms can be re-included in a person’s diet.
It is important to limit as few foods as possible to make sure that essential nutrients can be obtained.
In addition, the long-term effects of following a low-FODMAP diet are not known. Evidence shows that following such a diet leads to a decrease in total number of gut microbiota, and especially to decreases in one type of beneficial bacteria (5, 6).
Since the bacteria that live in our guts are thought to be intimately involved in maintaining our health and immune systems, the long-term consequence of lowering their numbers might have negative effects.
The bottom line:
Unnecessary exclusion of foods or food groups can put you at risk for nutrient deficiencies. The long-term effects of a low-FODMAP diet are unknown, but could include potential negative impacts.
Conclusion
While a low-FODMAP diet can offer significant relief for people suffering from Irritable Bowel Syndrome, it could also put you at risk for nutritional deficiencies or other negative consequences if not done carefully. Consulting a registered dietitian with training in this area can improve your chances of success with the diet.
If you do not suffer from IBS, this diet is unlikely to provide any benefit.