What Are Nightshades? Good or Bad? 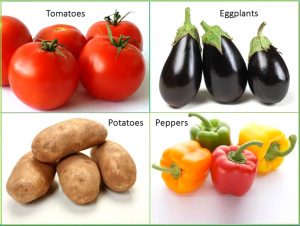 by David Greenwalt
What are nightshades?
Despite their rather mysterious-sounding name, “nightshades” are simply a family of plants. Their scientific name is Solanaceae. The family includes over 2,000 species, ranging from vines and herbs to shrubs and trees.
Most nightshades are inedible, but a few are commonly eaten: potatoes, tomatoes, bell peppers, chili peppers, and eggplant. Less common foods from the nightshade family are ground cherries, tomatilloes, and red goji berries.
Nightshades fruits and vegetables: