Brown Rice versus White Rice:  Which One Is Really Healthier? 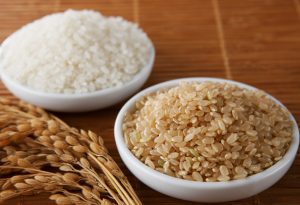 by David Greenwalt
Brown rice is a whole grain; white rice is not.
Brown rice contains more fiber, vitamins, minerals, and other nutrients than white rice.
Seems like brown rice is the clear winner in terms of health, right?
Some have suggested that it may not be quite so clear. All those extra vitamins and minerals in brown rice are accompanied by phytates – molecules that can limit absorption of some nutrients.
In recent years, there has also been concern over levels of arsenic – a toxic metal – in rice, and especially in brown rice.
This article will take a closer look at the differences between brown and white rice, and the ways that they can affect your health.
Nutrients in Brown Rice versus White Rice
The difference between brown rice and white rice is similar to the difference between whole wheat flour and white flour. White rice, just like refined white flour, has been processed to remove parts of the grain.
Grains naturally contain 3 parts – the bran, germ, and endosperm. Whole grains like brown rice and whole wheat contain all 3 parts. Refined grains like white flour and white rice have had the bran and germ removed, leaving only the endosperm.
This is important because the bran and the germ contain most of a grain’s beneficial nutrients – including most of the fiber, potassium, and magnesium.
When the bran and germ are stripped away, as in white rice, many nutrients are removed as well.
Nutrients in White Rice versus Brown Rice

Source: http://www.health.harvard.edu/diseases-and-conditions/glycemic_index_and_glycemic_load_for_100_foods
Higher glycemic index has been consistently associated with increased risk of type 2 diabetes (25, 26, 27, 28).
The bottom line:
Brown rice seems to lower risk of diabetes, while white rice may increase risk.
Brown Rice May Help with Weight Management
Fiber-containing foods cause a feeling of “fullness” and have been linked to decreased risk of obesity (29, 30). Since brown rice contains about twice as much fiber as white rice, it makes sense that it could be better for controlling weight.
One randomized-controlled trial of overweight and obese women compared the effects of eating either white rice or brown rice daily for 6 weeks. Following the brown rice diet, participants had significantly lower body weight, reduced waist and hip circumference, and lower body mass index (BMI) (31).
Conclusion
Brown rice contains more health-promoting nutrients than white rice. It has more fiber, B vitamins, potassium, magnesium, healthy fats, and antioxidants.
While brown rice does contain phytates and higher levels of arsenic than white rice, no adverse health effects have been linked to it.
In fact, brown rice seems to lower risk of diabetes and possibly some types of cancer. It may also benefit those trying to watch their weight.
For those who choose to include rice in their diets, we consider it prudent to choose brown over white rice. Up to a few cups per day should not pose any health risk, as long it is eaten as part of a varied diet including plenty of fruits, vegetables, and sources of protein.