Is Setpoint the Reason Your Body is Stuck? 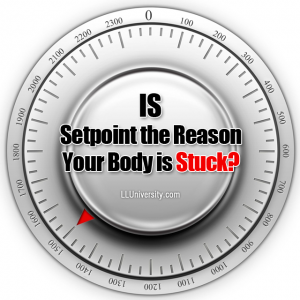 This model, then, proposes that while our brains and bodies do play a role in trying to regulate our food intake and body weight, these physiological mechanisms could be overpowered by aspects of our modern environment that make overeating and under-exercising so easy.

While some risk factors for obesity are out of our control (genetic factors or mother’s diet during pregnancy (19), for example), MOST others surely are within our control. We can choose to eat healthfully, control our portions, and exercise regularly. We can choose to create healthy food environments at home for ourselves and our families. And we can choose to eat when we are hungry, stop when we are full, and enjoy meals in the company of friends and family. And, even when fake-food addicted, we can choose to engage in the level of recovery necessary to be successful.
While we may not be as thin as we would like (or perhaps as thin as society has convinced us is desirable), we can definitely increase our odds of living a healthy and long life.