Nutrient Timing – Does it matter? 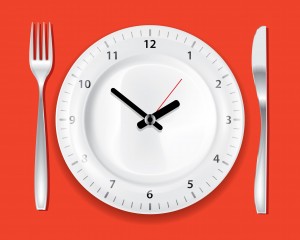 by David Greenwalt
It was long thought that a calorie was a calorie, no matter when it was consumed. The balance of calories eaten versus calories burned (“calories in, calories out”) has been cited for decades as the simple equation behind the complex struggle for weight loss that many people face.
More recently, however, scientists are beginning to discover that there may be more – indeed, much more – to the weight loss equation. Part of their focus has been on revealing the potentially important role of nutrient timing.

Is the same true for people?

In people, researchers examining the association between nutrient timing and weight loss have found mixed results.
One short-term study looked at 3 different nutrient timing patterns among obese women (3). The women consumed about the same number of calories during each phase of the study. During the first phase, calories were distributed across 5 meals each day; during the second phase the women consumed all of the calories between 9:00 and 11:00 a.m.; during the final phase they consumed all of the calories between 6:00 and 8:00 p.m. There were no significant differences in weight loss or body fat between the 3 phases, suggesting that timing of calorie intake made no difference.
Another study of overweight and obese women also failed to find a clear association between nutrient timing and weight loss (4). Researchers compared participants who ate most of their food at night to those who ate most of their food in the morning. During the first phase of the trial, those who consumed most of their food at night lost more weight than those who consumed most at breakfast. During the second phase of the trial, the same group of women, now consuming most of their calories at breakfast, lost more weight again. Researchers concluded that this could be at least partially explained by the fact that the group that lost the most weight during both phases had higher body fat to begin with, which usually makes fat loss easier.
Other research has found contradictory results, and has suggested an association between eating early in the day and weight loss.
A study of 420 overweight and obese individuals split participants into groups according to whether they ate most of their calories before 3 p.m. (early eaters) or after 3 p.m. (late eaters) (5). The groups were similar in other respects – they ate the same total number of calories, ate the same types of food, exercised similar amounts, and got the same amount of sleep. Twenty weeks later, researchers found that late eaters had lost significantly less weight, and lost weight at a slower rate than early eaters.
In another study, two groups of women consumed the same number of calories each day. One group ate most of their calories at breakfast, while the other group consumed most of their calories at dinner (6). The group that ate large breakfasts lost more weight and had a greater reduction in waist size compared to those that ate large dinners. Large breakfast eaters also saw their triglyceride levels (a type of “bad” cholesterol) decrease by over 30%, while large dinner eaters say theirs increase by almost 15%.
The bottom line:
Research looking at the association between meal timing and weight loss has had mixed results. While some evidence suggests eating earlier in the day can assist with weight loss, other studies have failed to confirm this.

A slightly different take on the food timing question is whether time-restricted feeding could affect our weight and/or metabolism.
That is, if we tell ourselves that we are only going to have the option to eat during an 8-hour or 10-hour window of time, would that be helpful for weight loss?
One group of scientists tried to answer this question by studying two groups of mice (7). One group was allowed to eat whenever they wanted to, while the other only had food available for eight hours each day. While the two groups ended up eating similar total numbers of calories, the mice in the time-restricted condition were less likely to become obese. They had fewer fat deposits form in their livers, less inflammation, and were less likely to have high insulin levels.
A 2-week study in human adults of normal body weight also found a possible link between restricted eating times and weight loss (8). Participants who were not allowed to eat between the hours of 7:00 p.m. and 6:00 a.m. consumed fewer total calories than those who were not restricted. Fewer total calories, of course, could lead to weight loss over time.
The bottom line:
Restricting food intake to a certain number of hours each day may be advantageous for weight management.

Given the evidence that constant access to food resulted in more weight gain, researchers wanted to know whether restricting food availability could reverse the negative impacts in mice that were already obese.
They compared obese mice with constant access to a high-fat diet to others who had the same foods available, but only for a certain period of time each day. Both groups consumed the same number of calories.
Those in the time-restricted group ended up with lower body weight, lower cholesterol, and improved sensitivity to insulin. In addition, those in the time-restricted group showed normal function of a number of “clock” genes that are involved with maintaining circadian rhythm (more below). These researchers concluded that time-restricted feeding provides a “time cue” and resets the circadian clock, leading to better health (8).
The bottom line:
Restricting food availability to a certain number of hours each day may be a strategy to promote weight loss in obese individuals.

A link between nutrient timing and weight: circadian rhythms

Circadian rhythms are physical, mental and behavioral changes in living things that follow a roughly 24-hour cycle.
Energy metabolism is one of the many body processes that follow a cyclical pattern. For example, there are cyclical changes over the 24-hour day in our blood glucose and insulin levels, as well as in the levels of hormones that play a part in our feelings of hunger and fullness (9, 10).
In humans, circadian rhythms are generated by a “master clock” in our brains that coordinates other clocks in cells throughout our bodies so that they are all in synch. Although the “master clock” in our brains drives circadian rhythms, they can also be affected by such factors as sunlight, temperature, sleep/wake cycles, and feeding patterns (1, 8, 11).
Feeding outside of usual times (for example, during normal sleeping hours) can disrupt the circadian system by causing a de-synchronization of the body clocks and the “master clock” in the brain (12). (Think of it as if your house has many clocks – the “master clock” is in the kitchen and the “body clocks” are those in the bedrooms. If one of the bedroom clocks is running slowly, for example, it will become de-synchronized from the master clock.)
This de-synchronization, or upsetting of the balance between the central brain clock and other body clocks, is related to the development of obesity and Type 2 diabetes (13).
In one study, a group of adults was scheduled a 28-hour “day,” during which they slept and ate during all phases of normal circadian rhythm. After 10 days, participants had significantly lower levels of leptin (a hormone made by fat cells that makes us feel full), higher blood pressure, and higher blood glucose. In fact, some participants had glucose levels typical of people with pre-diabetes (14).
It has been known for a long time that people who work overnight shifts are at increased risk for obesity, diabetes and cardiovascular disease. This may be a result of chronically sleeping and eating at times that are not in synch with normal circadian rhythms (15).
The bottom line:
Our body clocks are affected by food timing. Eating during normal sleeping hours seems to throw off our internal clocks and affect our metabolism.

Circadian clocks are present in all of our tissues, including fat tissue. These body clocks may play a role in the metabolism that takes place in our fat tissues (16, 17, 18).
There appear to be daily patterns in the way that cells either accumulate and store fat, or make it available for use as energy (19). Since the food that we eat is a source of energy for fat tissue, it may be that the timing of meals affects whether fat is stored or used for energy. This, of course, could influence whether we gain or lose weight.

Does the type of food matter?

Some of the above evidence suggests that eating late in the day or during normal sleeping hours could increase risk of weight gain. But does type of food matter? If you eat a big bowl of steamed broccoli as a midnight snack, for example, are you really going to gain weight?
So far, it is not known whether any effects on our metabolism and weight of eating during “off” hours are caused by specific nutrients (such as fat and sugar), or caused by calorie intake in general (20).
A study looking at timing of carbohydrate intake among obese men found that eating more carbohydrates at dinner led to greater weight loss (21). Researchers assigned participants to either eat most of their carbohydrates at breakfast, or at dinner. Those who consumed most carbohydrates at dinner lost more weight, more body fat, and even had improved insulin sensitivity and lower cholesterol. However, the group that ate most carbohydrates at dinner started out with higher BMI, weight, and body fat at the beginning of the study. This difference could have potentially made it easier for that group to lose weight.
Bottom line:
It is not clear whether any negative effects of late-night eating are caused by certain nutrients, or by food intake in general. Some research has even suggested that concentrating carbohydrate intake at the evening meal may help with weight loss.
David Says:
Evidence for an association between meal/nutrient timing and weight loss is mixed. Some studies suggest eating earlier in the day could help with weight loss, while others suggest no association, or even that eating later in the day could be beneficial.
Scientists have found that circadian rhythms affect the way that food eaten at different times is metabolized, and that food, in turn, appears to affect circadian rhythms. More research is needed to clarify the association between meal timing, circadian rhythm, and weight management.