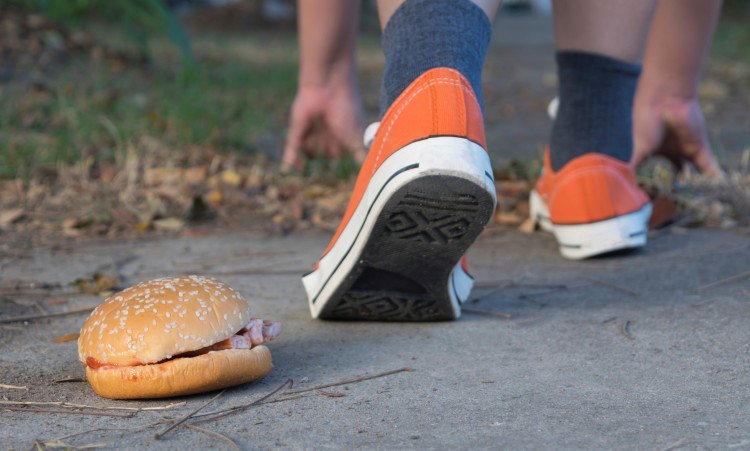 by David Greenwalt
The five-word diet “Eat less and exercise more” gets all of the attention when it comes to fat loss. Sounds simple enough, that is until you actually think about it. And recently researchers have done just that – begun thinking about it.
Recent studies have challenged the idea that body weight is based simply on “calories in” and “calories out.” (1)
Despite an overall increase in caloric intake in the U.S. over the past four decades, another study, in line with several other findings, wasn’t able to find a direct relationship between caloric intake and increase in body mass index (BMI) over time. (2) (3) (4)
Different factors are at play when it comes to obesity. While overweight individuals with high BMIs may be more likely to restrict caloric intake (5), they also may be more likely to have a lower resting metabolic rate due to factors like weight cycling (6), restricting calorie intake (7) or a decrease in the caloric cost of digesting and processing different macronutrients (carbs, proteins, fats, etc.) (8).
There is also evidence that hormonal changes due to stress, lack of sleep or environmental toxins may alter how calories are distributed in the body (9).
When it comes to sleep deprivation, in particular, there are several ways it could increase the chances of obesity. (10) In addition to disrupting the balance of key hormones that control appetite, when people don’t get enough sleep, they may be too tired to exercise or they may take in more calories because they are awake longer and have more opportunities to eat.
Endocrine-disruptors are found to contribute to obesity. (11) These chemicals can interfere with the body’s endocrine signaling and disrupt certain metabolic processes, which can lead to weight gain. To combat this, we can eliminate foods with chemicals and instead eat real food.
An increase in pharmaceutical prescriptions that lead to weight gain, higher maternal age, decreased prevalence of smoking and low calcium in the body may also lead to weight gain (12). In addition, studies on the body’s intestinal bacteria are revealing significant differences in the gut micro-organisms of obese and non-obese individuals (13).
Although low-carbohydrate, high-protein diets have become a popular strategy for weight loss over the past several years, there is evidence that total energy intake contributes more to body weight than the macronutrient makeup of a diet (14).
Recent studies suggest that physical activity has significantly increased in line with the rise in obesity (15). Evidence suggests that physical activity may contribute much less to changes in body weight than energy intake (16).
Bottom Line: Obesity is about more than just caloric intake. Other factors such as metabolism, hormones, sleep deprivation and endocrine-disrupting chemicals all can play a significant role in weight gain. Low-carbohydrate, high-protein diets and getting more exercise are often thought to be key to weight loss, but it’s not that simple.
Although obesity is a complex issue and this article won’t address every issue I’ll give you four keys to fat loss that go beyond calories in and calories out:

It might be boring but I’ll tell you what – barely a day goes by that yet ANOTHER research article doesn’t come out touting the benefits of getting enough sleep and the incredibly negative effects when we don’t.
If you’re not regularly getting at least seven hours of sleep a night then you need to find ways to get more of it. Not getting enough sleep affects leptin and ghrelin, which are (to oversimplify) your hunger hormones. Sleep is SO important that even if you are doing everything else right, if you are big-time sleep deprived, NOTHING else works right.
If you want to be able to EAT MORE and EXERCISE LESS. If you want your efforts to be fully rewarded. If you want your metabolism to be running full steam. If you want to think more clearly and make better in-the-moment decisions with food? If you want to reduce cravings. If you want more energy. Get your sleep!

Ya, this is kind of part of the “calories in calories out” chant but, it’s more about mindset for those who think their exercise gives them a gold card to eating a LOT more than they should.
For the most part a low body fat is made in the kitchen but overall fitness is made with exercise. Even so far too many people start eating more as they start an exercise program or as they increase their exercise minutes or increase their exercise intensity. If you want to lose the fat this is almost always the wrong thing to do.
Some of the calorie and exercise trackers like “My Fitness Pal” or “Lose It” actually encourage users to eat more as they exercise more. So your base recommendation is 1200 kcals per day but you happen, on this day, to exercise 20 minutes more than planned? Great! Eat some more food! You’ve earned it!
No! DON’T eat or drink more because you added a bit more activity to your day. Instead let your scale tell you when it’s time to consume more calories. Uh oh, did I just say that? Isn’t the scale a liar? What about all that new muscle you will have added in the three weeks since you started doing five-pound dumbbell strength training exercises? [Please insert MASSIVE eyeroll here from me.] Over a three-week period the scale isn’t a liar and no you haven’t added diddly for muscle either.
Here’s my basic guideline for when you need to bump calories up; If you don’t intend to lose three pounds a week, but you DO lose at least three pounds a week, for three or more weeks in a row? THEN feel free to add more calories to your plan. Otherwise? Once you have a caloric target that’s sane and not some starvation diet then stick with the plan and don’t bump your calories up because you exercised a bit more.

3. Use This Four-Letter Word

This four-letter word is critical for those who have struggled to get the fat off, really struggled, and have more to lose than an “it’d be nice” 10 pounds.
The four-letter word is TEAM.
“T.” Time- the gift you’ve given others that you MUST give yourself.
“E.” Education to sort out all the nutrition, exercise and emotional hacks.
“A.” Accountability to help you honor your promises.
“M.” Mentoring and support from personal, professional and spiritual support as needed.
Applying the TEAM formula can be the difference between losing fat permanently and staying in the same vicious cycle.

Ya, I’ve read the research on small change philosophy. Yes, I understand some really will do better losing 0.5 pounds a week when they weigh 250 pounds to start.
Ya, I get it, parking further away from Walmart’s front door and taking the stairs instead of the elevator burns a few more calories. Yes, for God’s sake, I hear you loud and clear that substituting the double quarter pounder with cheese for a hamburger is a step in the right direction. Choosing an 8-inch plate rather than a 10 can help–a little. I got it. Okay?
But you know what? Beyond the first week or two, and even then, only for those VERY heavy, I say get more aggressive. I wouldn’t go so far to say “Go big or go home” but I would say “Raise your standards and set smart stretch goals. Be smart but be aggressive.” See my interview with Dr. Casazza on this issue too.
Losing 0.5 pounds a week is SO demotivating. And it’s SO easy to just stay the same when you do. Your body, even if you’re obese, doesn’t want you to change. It LOVES homeostasis – staying the same/steady.
So if you’re 250 pounds and you’re losing 2-3 pounds a week? Hey, you’re going to notice that. That’s motivating! Yes, it’ll require more effort. Ya, you’ll have to dig a little deeper. Yes, you’ll have to make good choices more often and feel the pangs of hunger a bit more (maybe) and yes you’ll have to lace up the shoes and go for that walk or lift some iron when you don’t want to. It’s more uncomfortable.
And you know what? It works. In a month when you’re down 10 pounds you and everyone else will notice what you’ve been doing. You won’t be playing around with the same damn 2-3 pounds. You won’t have to lie to yourself that “My clothes feel looser even though the scale hasn’t dropped. Must be all that new muscle I’ve added.” [Insert EVEN BIGGER eyeroll than the last time.]
Beyond it actually working. Beyond it being more motivating. The extra effort, the forced adaptation to change thinking, feelings and behaviors, all of it, will help you to create a new “normal” (a new set point) and as you arrive at your maintenance weight and can actually eat some more and exercise a bit less because you’re no longer losing fat it’ll really feel easy compared to the efforts you put into the action of getting the fat off.

I’ve only begun to scratch the surface of course. There’s so much more to share. I’ll simply close by saying the formula of calories in and calories out IS king – yes it is, from a purely mathematical, practical weight-loss perspective. Yes it is. Calories ARE king. But how you go about ensuring you get in enough, not too much, the right kind of both the calories in and the calories out is anything but a simple formula. Some say it’s not rocket science. They’re right. It’s more complex. The good news is this is what I do for a living. Making sense of and simplifying the complexity that IS permanent weight loss is my vocation and my passion. I’ve been helping people to achieve their weight loss goals since 1982 and I’ve been coaching and teaching online since 1999. If you’ve tried “Eat less and exercise more” and you are still struggling to achieve your goals I recommend you enroll in Lifestyle 101 to get started.