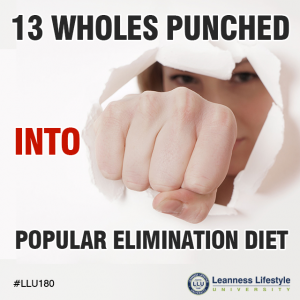 by David Greenwalt
Diets that tell you to completely exclude certain foods or food groups rarely have any scientific basis. An exception to this could be elimination diets, which can help people with food allergies or intolerances figure out which foods they have reactions to. More likely, however, medically unsupervised exclusionary diets are an attempt by their authors to get you to purchase their latest diet book and/or “official” supplements “approved” by them.
Be sure and take the quiz when you’re through reading to test your knowledge and for fun.
In reality, unless you have a food allergy, intolerance or addiction, all real food can be part of a healthy diet.
This article examines the claims of one such exclusionary diet.
Claim 1: Scale weight says nothing about your health.
The reality: Scale weight does not tell you EVERYTHING about your health, but it certainly tells you SOMETHING.
Like a healthy fasting glucose and blood pressure, a healthy body composition is an indice of health-related fitness. Those who buy into the false narrative that body composition doesn’t matter as long as work capacity is strong have swallowed a misguided “functional-fitness” pill.
But what does scale weight have to do with body composition? Quite a bit.
Body mass index (BMI) is a measure of body composition based on height and weight. To calculate BMI you only need two things: height and weight. This is the reason it’s so universally used in wellness and medicine as a baseline indicator of fatness – it’s easy and completely non-invasive. BMI is your weight in kilograms divided by the square of height in meters.
BMI is demonized as a measure of body composition when the following reason is given; WHAT ABOUT ALL THAT MUSCLE MASS PEOPLE HAVE?! People (the 98%) don’t have too much muscle. If anything they have too little. Truth be told? Most who demonize BMI as worthless by using the muscle excuse are usually just carrying too many pounds of extra fluff. (39)
More times than not people who are assessed as being too fat based on BMI are exactly that – too fat. When 66 percent of the public is overweight and 35 percent are obese it’s not all that hard to be right when we presume a high BMI to correctly indicate that person is overfat.
Compared to people who are not overweight, people who are obese have a higher risk of many serious conditions, including:

In addition, grains contain a lot of disease-fighting antioxidants. Components of grains (both refined and whole) have shown antioxidant and anti-inflammatory activities in both test-tube and animal studies. Therefore, scientists have suggested that grains may prevent oxidative damage and inflammation-related disease (20).
Bottom Line: There is simply no evidence that eating single-ingredient grains causes the negative health effects that these authors cite. Unless you have an intolerance or allergy to grains, or celiac disease, eating whole grains may reduce your risk of many chronic diseases.
Claim 7: Green beans, snow peas, and snap peas are okay to eat, but other legumes are not. No dried beans (black, pinto, kidney, garbanzo, etc.), soybeans, peanuts, peas, or lentils are allowed. The author states that legumes are nutrient-poor, and contain anti-nutrients (phytates and lectins) that rob the body of minerals and could damage your intestines.
The reality: First off, legumes are anything but nutrient-poor. They are an excellent source of high-quality protein, and without the accompanying saturated fats that often come with animal protein. In addition, they are also an excellent source of fiber and folate, and are high in iron and zinc. Many beans are also a good source of calcium (23).
Legumes can help prevent and manage a variety of chronic diseases – including diabetes, hypertension, and high cholesterol.
Numerous studies have shown that people who eat more legumes have:

Legumes and nuts do contain phytic acid, which at one time was considered an anti-nutrient because it can bind minerals and protein and make them less available. Recent research, however, has shown that phytic acid is a potent antioxidant with positive nutritional benefits.
Scientists have concluded that the antioxidant actions of phytic acid may even help prevent intestinal diseases and some types of cancer (25, 26). For example, one group of scientists found that phytic acid significantly decreased growth of ovarian, breast, and liver cancer cells (26).
Similarly, the lectins in legumes (proteins that can bind carbohydrates) have been suspected of causing intestinal disorders and causing allergic reactions (27). However, they are also being investigated for potential beneficial effects, including for anti-cancer properties, and for reducing obesity and type 2 diabetes (27).

It is important to keep in mind, too, that when we eat whole foods like legumes we are eating the whole food – not just a pile of lectins or phytates. The sum of the evidence has shown that legumes have positive health effects.

Elimination diets, usually starting with 2-4 weeks of some kind of hard core elimination abound. They’ve been around for decades. Starting five or so years ago it became trendy to do some kind of an elimination diet. We at LLU even had a version for a few years. We’ve since “grown up” and moved to recommendations for all, from start to finish, that they eat real food 90+% of the time while we provide guidance on limiting easy-to-overeat or foods most likely to cause people not only health problem but that are also likely to thwart weight-management goals. No more elimination dieting with a tricky re-introduction plan to follow.
Take the quiz to test your knowledge and for fun.