Inflammation, Nutrition and Obesity – What are the Connections? 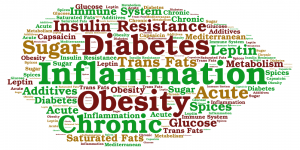 by David Greenwalt
Inflammation is a hot topic, and with good reason. In recent years, scientists have come a long way in elucidating the role that inflammation plays in our health and disease states.
In a general sense, inflammation is the name given to the way that our bodies and immune systems react to potential trouble. When your immune system senses that something is not right – perhaps you cut a finger, or have a cold virus – it springs into action to try to combat the problem. It does so by initiating a cascade of events which, among other effects, sends more white blood cells to the affected region to begin repair of any affected tissues. This is the process of inflammation.

Chronic inflammation is essentially caused by a malfunction of the immune system. A cascade of events is set off to protect against a virus or injury, when no viral invader or injury is actually present.
Scientists are discovering that certain foods and other substances can increase these inflammatory pathways. In addition, obesity itself is increasingly being identified as a low-grade inflammatory state.
Sugar
Some research suggests that simple sugars, whether they be in the form of table sugar, honey, high fructose corn syrup, or highly processed carbohydrate foods such as white bread, white rice or sugary drinks, cause increased levels of inflammatory markers (2, 3).
Most studies on the subject have looked at glycemic index or glycemic load, which are ways to measure the effects of various foods on our blood sugar levels. A recent review found that 12 of 26 studies showed inflammatory effects for high-glycemic foods (3).
Trans Fats
A study looking at the relationship between dietary fats and inflammation found that consumption of tran-fats led to higher levels of markers of inflammation, compared with carbohydrate consumption (4). Trans-fats are those “partially-hydrogenated” fats found in foods including shortening, margarine, cookies, cakes and coffee creamers.
Other researchers comparing the effects of different types of fat (saturated, monounsaturated, and trans-) found no significantly different effects on inflammation (5). Given the numerous other negative effects of trans-fats (on cholesterol levels and heart health), however, avoiding them seems like a good idea.
Saturated Fats and Cholesterol
Both saturated fat intake and high-cholesterol diets have been shown to increase inflammatory markers (6, 7, 8).
Interestingly, the association between dietary cholesterol and increased inflammation was observed in insulin-sensitive people, but not in either lean or obese insulin-resistant people. The authors of this study suggested that increases in inflammation were not observed in insulin-resistant participants because their inflammatory markers were already elevated at the beginning of the study. In addition, research has shown that cholesterol absorption may be inhibited in people who are already obese or insulin-resistant (9, 10).
The bottom line:
Diets high in sugar, refined carbohydrates, saturated fats, and trans-fats appear to increase markers of chronic inflammation.

Food additives can also cause inflammation

Food additives have also been looked at as possible sources of inflammation. While this list is not exhaustive, it does seem to indicate that chemicals added to processed food products may affect our immune response.
One group of scientists looked at the association between two types of emulsifiers (very common food additives) and inflammation (11). They discovered that even low concentrations of the emulsifiers caused low-grade inflammation and obesity in mice. The researchers suggested that the emulsifiers caused inflammation and obesity by disturbing the relationship between intestinal cells and the (usually helpful) bacterial microbes that live there.
Citrate is one of the most widely used food additives, used for everything from curing meats to firming vegetables to preserving food. Researchers looking at the effects of citrate in mice found that those receiving citrate had increased adipose tissue inflammation and altered glucose metabolism (12). They concluded that citrate consumption could cause the complications associated with obesity.
Carmel color is another commonly used food additive, especially in soft drinks. Scientists have shown that soft drinks containing caramel coloring increase insulin resistance and inflammation (13).
Fructose consumption has also been linked to inflammation. Scientists studying both animal and human models have concluded that diets high in fructose lead to increased levels of inflammation and markers of inflammation (14, 15).
The bottom line:
Scientists are finding that many food additives once thought to be benign in fact appear to increase levels of inflammation.

Obesity – A state of chronic inflammation

The evidence above suggests that diets high in refined carbohydrates, unhealthy fats and processed foods may increase levels of inflammation. We know that such diets can also lead to overweight and obesity. But could obesity itself also cause inflammation?
Numerous studies have looked at the association between a marker of inflammation called CRP (C-reactive protein) and obesity. They have discovered that as body mass index and/or total fat mass increases, level of CRP also increases (16, 17). Findings such as these suggest that there is a state of low-grade chronic inflammation in overweight or obese individuals.
Individuals who are insulin-resistant (as in diabetes) also have higher levels of CRP (18). Inflammation works against the action of insulin, by preventing insulin from stimulating muscle and liver cells to absorb glucose from the bloodstream. This causes glucose levels in the blood to remain high, which in turn causes our bodies to produce more insulin, which leads to the formation of more fat tissue. This vicious circle of overweight/obesity, inflammation, and insulin resistance is one which scientists are still trying to understand better.

How does obesity cause inflammation?

Scientists are investigating a number of potential mechanisms through which obesity causes inflammation. Studies in both humans and rodents have shown that obese individuals have a greater number of adipose tissue macrophages (ATMs) (19, 20). Macrophages are a type of immune cell that normally function to protect us by cleaning up cellular debris. In the case of ATMs, however, they release chemicals that lead to inflammation and decreased sensitivity to insulin. Decreased sensitivity to insulin, in turn, can lead to weight gain and increased risk of diabetes.
In addition, consuming excessive amounts of fats has also been shown to decrease insulin sensitivity, although scientists are not sure exactly how this happens (21, 22). Insulin-resistant fat tissue also breaks down at a faster rate than other fat tissue, again leading to decreased insulin sensitivity (23).

Does inflammation also cause obesity?

As explained above, the relationship between overweight/obesity, inflammation, and insulin resistance seems to be circular. That is, obesity causes inflammation which leads to insulin resistance and further weight gain. But whether the circle always begins with obesity, or whether it could also begin with inflammation, is still a question of interest to scientists.
One study looked at markers of inflammation in over 2,000 non-diabetic middle-aged men (24). They found that those who had the highest levels of the markers were more likely to gain weight over the following 6 years, regardless of their weight at the beginning of the study.
In addition, diets high in sugar and saturated fat have been reported to cause inflammation in the brain’s hypothalamus, resulting in leptin resistance (25). Leptin is a hormone that plays an important part in appetite regulation and metabolism. When the brain becomes unresponsive to leptin, metabolism of glucose and fat is altered, resulting in weight gain and insulin resistance.
Researchers studying rats found that leptin resistance led to obesity in those animals on high fat diets, but not in those on normal diets. Animals given high amounts of fructose also developed leptin resistance and obesity on a high-fat diet (26).

Just as some foods have been found to increase inflammation, others have been shown to decrease markers of inflammation. Research points to the Mediterranean diet, and especially fruits, vegetables and whole grains, as having anti-inflammatory effects (27).
The Mediterranean diet focuses on fruits, vegetable, whole grains, lean meats, and healthy fats like those in canola oil, olive oil, fish, and nuts. In addition to proven health benefits including lowered risk of obesity and diabetes, one study that followed almost 25,000 people following the Mediterranean diet showed that they had decreased markers of inflammation (28, 29).
Several spices have also been shown to have anti-inflammatory effects. Capsaicin, a component of chili pepper, has been found to decrease inflammation in mice, as well as improving weight loss in humans (30, 31). Compounds found in other spices including cinnamon, cumin, turmeric, cocoa and ginger have also been shown to protect against inflammation (32, 33, 34).

A healthy diet including fruits, vegetable, a bit of whole grains, healthy fats and plenty of spices may decrease levels of chronic inflammation, as well as decrease risk of obesity and diabetes. The relationship between inflammation, obesity and insulin resistance is complex and likely multi-directional in nature. Our diets play an integral part in these relationships as well, by influencing inflammation levels, weight and energy metabolism.