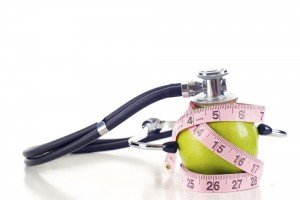 Researchers striving to break the link between obesity and cancer have found in a new preclinical study that significant weight loss through calorie restriction, but not moderate weight loss through a low-fat diet, was linked to reduced breast cancer growth.
In the study, researchers with the UNC Lineberger Comprehensive Cancer Center examined whether weight loss via four different diets was linked to reduced tumor growth in laboratory models of breast cancer. While tumor size did not differ between obese mice and obese mice that returned to a normal weight on a low-fat diet, they did find that obese mice that lost significant amounts of weight on three calorie-restricted diets had smaller tumors.
“Based on our results, it appears that the degree of calorie restriction, and hence the amount of weight lost, matters more than the specific dietary changes used to generate the weight loss,” said Laura Bowers, PhD, a postdoctoral fellow in the UNC Lineberger Cancer Control Education Program. “Our findings are too preliminary to make any kind of recommendation for people. The overall message is that the breast cancer-promoting effects of chronic obesity may not be easily reversible with moderate weight loss, but more severe weight loss diets may be effective regardless of whether carbohydrate or fat is restricted.”
In the study, researchers randomized mice to either maintain a normal weight or become obese by consuming a high calorie diet for 15 weeks. The obese mice were then randomly selected to lose weight across 10 weeks on one of four diets: unrestricted consumption of a low-fat diet; a high-carb diet or low-carb diet, both with a 30 percent reduction in calories per day; or the increasingly popular “5:2” diet involving intermittent reduction of calorie intake on two days per week by 70 percent.
Researchers found that mice on the low-fat diet returned to a normal weight and normal body fat percentage. Meanwhile, mice in the other three weight loss groups weighed significantly less after 10 weeks than mice that had maintained a normal body weight throughout the study.
The researchers then studied tumor growth. Mice in the obese group had greater tumor volume and weight compared to mice that maintained a normal weight throughout study. However, despite returning to a normal weight, tumor size in the mice on the low-fat diet was equivalent to the mice that remained obese. Mice on the three calorie restricted diets had smaller tumors than both obese and low-fat diet mice.
To further clarify whether diet type is linked to tumor size, Bowers said additional studies are needed. The impact of weight loss via the low-fat diet on tumor growth should be compared to other diets of the same calorie level that would produce equivalent weight loss. She also stated that the researchers are currently studying the molecular mechanisms that may be responsible for the differences in tumor size between diet groups.

Seems to be pretty preliminary overall but I found it interesting that the SIGNIFICANCE of the weight loss, not the type of “diet” followed was most important for reducing cancer risk.