Is moderate drinking really good for you? Jury's still out 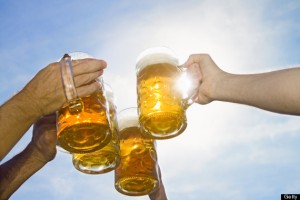 Research in the past few years has seesawed pretty heavily on the question of whether a little alcohol is good for us. Some studies have suggested that alcohol in moderation is linked to reduced risk for a number of diseases, compared to those who don’t drink–it’s good for heart, it reduces Alzheimer’s disease risk, and may even be linked to a longer life, some studies have found. And some researchers have even suggested that doctors recommend drinking to their alcohol-abstinent patients. But a new study casts some doubt on the connection entirely, asking whether moderate drinkers are really in better shape than abstainers. And this is really because we don’t know why the abstainers are abstaining in the first place.
“A fundamental question is, who are these moderate drinkers being compared against?” study author Tim Stockwell asked.
Stockwell and his team looked over 87 earlier studies, to determine whether moderate alcohol was really better than none. For the majority of the studies, former drinkers were included in the “abstainer” or the “occasional drinker” groups, which poses a lot of problems and biases for the research. It could be, for instance, that people quit alcohol precisely because they were dealing with health issues. Which would bias the results entirely, making it look like abstinence was the cause of health problems rather than the “result.” In fact, the team found only 13 studies that accounted for why the abstainers abstained. And for these studies, there was no benefit in drinking alcohol over avoiding it.
The researchers also pointed out that in past studies, it’s generally the “occasional” drinkers who have the real advantage in longevity–but it’s unlikely that it’s the alcohol that’s really responsible for the benefit. It’s probably something else.

And the same is probably true for moderate drinking: That the health connection is likely explained by something else these individuals are doing–perhaps exercising or eating more healthily. “Either alcohol is a panacea, or moderate drinking is really a marker of something else,” Stockwell said.
This is not the first study to suggest that alcohol may be less good for us than we thought. Over the last 10 years or so, other researchers have pointed out the fact that when you take former drinkers out of the equation, the benefits of moderate drinking suddenly disappear. In the same vein, the laundry list of diseases for which alcohol has been linked to reduced risk doesn’t make much sense: The authors of the new study point out, for instance, that reductions in deafness, hip fractures, the common cold, cancers, birth complications, dementia and even liver cirrhosis have all been linked to moderate drinking. And some of these don’t make a whole lot of sense physiologically.
Whether the major health organizations around the world will ultimately change their recommendations is still up for grabs. But if they they are, Britain has beaten us to the punch. A couple of months ago, British health officials reduced their alcohol recommendations for men to that of women (now, 14 units per week is the upper recommended limit, which is the equivalent of about six to seven glasses of wine). They decided that there’s little evidence that there’s such a great sex difference in drinking, and that the 21 units they’d previously allowed for may not be a healthy level in reality.

Time will tell how our attitudes toward alcohol shift in light of these new studies. Maybe occasional drinking will become the new norm–rather than a glass or two a day, perhaps a glass or two a week will become the accepted level. In any case, the new study may throw another kink in our relationship to alcohol. (That said, some researchers are still arguing that the research behind alcohol’s benefits, or at least its safety, is still convincing enough not to discourage its consumption completely.)
“There’s a general idea out there that alcohol is good for us, because that’s what you hear reported all the time,” Stockwell said. “But there are many reasons to be skeptical.”
David Says: Makes a lot of sense to at least consider that moderate alcohol consumption may not be the reason for benefits observed in previous studies. What ELSE do moderate drinkers do that impact their health?
Story Source:
The above post is reprinted from materials provided by Forbes. The original item was written by Alice Walton. Note: Materials may be edited for content and length.
Journal Reference:
Stockwell, T., Zhao, J., Panwar, S., Roemer, A., Naimi, T., & Chikritzhs, T.Do “moderate” drinkers have reduced mortality risk? A systematic review and meta-analysis of alcohol consumption and all-cause mortality. Journal of Studies on Alcohol and Drugs, 2016 DOI: 10.15288/jsad.2016.77.185