Lower Odds of Being Depressed If You're Not Obese 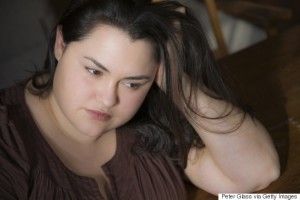 Even with higher education, women with a body mass index (BMI) of 30-34.9 (obese I) have double the risk of depression compared with women of normal weight and same educational attainment, according to a new study conducted by a sociologist at Rice University.
The study was published this month by the journal Obesity Research and Clinical Practice.
The researchers used the standard weight categories: normal weight (BMI 18.5-24.9), overweight (BMI 25-29.9), obese I (30-34.9), obese II (35-39.9) and obese III (BMI greater than 39.9). They found similar results for obese II and III participants; however, not enough participants were available for statistical validation. The BMI classifications are related to body-fat levels and predict the likelihood of developing obesity-related health problems.
“Previous research has shown an association of depression and obesity with low education, but we’re showing it also exists with women who have higher education as well,” said Ashley Kranjac, lead author and Rice postdoctoral fellow in population health in Rice’s Department of Sociology and Rice’s Kinder Institute for Urban Research. “I was surprised by the finding. Usually higher education is associated with all the good things, like higher income, better neighborhoods, greater access to health care and better overall health, and you’d never think education and obesity combined could have this effect on mental health.”
The study, “Depression and Body-Mass Index, Differences by Education: Evidence from a Population-based Study of Adult Women in the U.S. Buffalo-Niagara Region,” involved a random sample of 1,928 healthy women ages 35-80. Researchers used New York State Department of Motor Vehicle records and information from the Health Care Finance Association to identify potential participants.
Trained professional interviewers took physical measurements for body-mass index and conducted standardized, in-person interviews. The detailed interviews included questions dealing with demographic traits, medical history, diet and several aspects of alcohol consumption throughout the person’s lifetime. All participants also completed the Center for Epidemiologic Studies Depression Scale questionnaire, a tool designed to measure depression status among the general population.
Depressed women were more likely to be obese. Depressed women were more often older, not married, less educated, a former- or current-smoker, less physically active, consumed more calories, averaged less than eight hours of sleep and had a lower income.

David Says:
Which came first – the chicken or the egg? Does obesity CAUSE depression or does depression increase odds of obesity – or both? Losing weight won’t fix EVERYTHING. We know this is true. But if behaviors that lead to getting to and living at a healthy weight (nutrition, exercise and emotional fitness) are adhered to will life’s trial and tribulations be better managed? Yes. And as this study and others indicate, are you less likely to be depressed if you’re not obese? Yes. Plain and simple. Yes.
Story Source:
The above post is reprinted from materials provided by Rice University. Note: Materials may be edited for content and length.
Journal Reference:
Ashley Kranjac et al. Depression and Body-Mass Index, Differences by Education: Evidence from a Population-based Study of Adult Women in the U.S. Buffalo-Niagara Region. Obesity Research and Clinical Practice, March 2016