Biking or Walking to Work Helps Keep You Fit 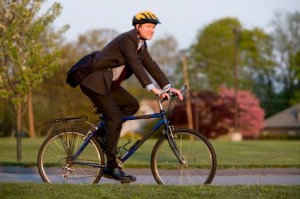 Walking, cycling or taking public transit to work helps middle-aged adults lose body fat and weight, new research suggests.
“Physical inactivity is one of the leading causes of ill health and premature mortality,” said study author Ellen Flint. She’s a lecturer in population health at the London School of Hygiene & Tropical Medicine in England.
“In England, two-thirds of adults do not meet recommended levels of physical activity. Encouraging public transport and active commuting, especially for those in mid-life when obesity becomes an increasing problem, could be an important part of the global policy response to population-level obesity prevention,” Flint concluded.
The study, published March 16 in The Lancet Diabetes & Endocrinology, included information from more than 150,000 people between the ages of 40 and 69 in the United Kingdom. Two-thirds of them drove to work each day, researchers said.
The study found that bicycle commuting offered the greatest benefits compared to using a car.
For example, a 53-year-old man who cycled to work weighed 11 pounds less, the study showed. Cycling to work also resulted in a 1.7 drop in body mass index (BMI — an estimate of body fat based on weight and height) compared to someone who drove to work.
The U.S. Centers for Disease Control and Prevention notes that a BMI score under 25 is considered normal weight. Twenty-five and above is overweight. Thirty and over is obese.
A 52-year-old woman who cycled to work weighed nearly 10 pounds less than a woman who drove to work. The woman cyclist would also have a 1.65 lower BMI score than a driver, the study showed.
Men and women who walked to work instead of driving dropped their BMI by as much as 0.98, the study found. The farther people cycled or walked to work, the greater their reductions in BMI, the study revealed.
Even taking public transportation made a difference, the study authors found. Men who used public transit had a 0.7 lower BMI than those who drove, as did those who combined public transit with walking or cycling to get to work (lower BMI of 1 for men and 0.7 lower BMI for women).
The connection between style of commuting and BMI was independent of other factors such as income, education, urban or rural home, drinking and smoking, and overall physical activity, health and disability.
“Many people live too far from their workplace for walking or cycling to be feasible, but even the incidental physical activity involved in public transport can have an important effect,” Flint said in a journal news release.
Lars Bo Andersen, from Sogndal and Fjordane University College in Norway, wrote an editorial accompanying the study. In it, he said the findings are important, “because commuting to work is an everyday activity that lots of working people need to do.
“Many people are not attracted to recreational sports or other leisure-time physical activities, which are proven to benefit health, and active transport might therefore be an important and easy choice to increase physical activity and the proportion of people achieving recommended levels of physical activity,” Andersen noted.
David Says: Awesome and pretty tough to do if you live in rural areas or areas that don’t safely allow you to walk or bike to work. But if you can do it? What’s not to love right?