Decatastrophizing: Bring It Down a Notch and the What If Technique 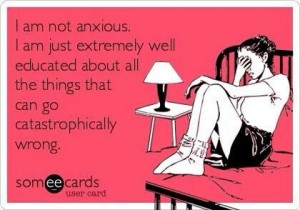 by David Greenwalt
If you’ve ever said anything remotely close to “This is the WORST day ever!” then you’ve used catastrophic language. When you look back on that day a week, month or year later nine times out of ten you wouldn’t classify it as your “worst” day ever. Going catastrophic is universal, we all do it, however, the best life managers are able to minimize their catastrophizing.

Bring It Down a Notch

Common catastrophic terms include: horrible, starving, awful, terrible, nightmare, disaster, and worst.
Sometimes we go catastrophic over an in-the-moment event like if we lock our keys in the car. We can easily agree, in the calm of reading an article like this, that locking our keys in the car is pretty low on the major life-events scale. But what about when you’ve had three hours of sleep, you’re in fear of losing your job and one of your kids has been getting solid Fs on his report card? Think it’d be unheard of to say “Worst day ever!” Of course not.
To better manage the in-the-moment events it takes a lot of practice changing our language. In essence, you need to bring it down a notch. Instead of saying “worst” choose a different, less inflammatory word – even “bad” is better than “worst.” Instead of “awful” say “uncomfortable.” Instead of “horrible” say “difficult.” The idea isn’t to act as though whatever just happened is a day at Disney but instead NOT make whatever just happened seem as bad as a loved one being murdered.
The more often you choose the less catastrophic, less inflammatory, less panic inducing word the better you’ll get. It really is like a muscle and NOT like eye color. It gets stronger the more you use it and it’s not your destiny – it’s not defined at birth – you really can improve it.

Beyond an in-the-moment event a hallmark of generalized anxiety disorder is consistent anxiety and worry about something that is out of proportion to a given situation. Most of the worry is directed at potential negative consequences of some event or circumstance. For example, a person may worry for hours that a small mistake at work would lead to being fired, or that minor social awkwardness would lead to losing a friend.
One way to decatastrophize the persistent anxiety is to realistically confront the feared negative outcome. Essentially, ask “what if” the terrible things did indeed happen. What would you do then?
For the above examples, one could ask “what if I actually was fired, what would I do?” The response is generally: Although it may be tough for a period of time, I would have to find a new job.
In the other example, you might conclude “It would be painful and embarrassing, but I would get over it and find a new friend.”
Try It!
To practice, divide a sheet of paper into three columns. In the first, write a feared negative outcome. In the second, write it as a “what if” sentence. In the third column write what you would actually do.
Check in with yourself to see if actually confronting the fear and making a plan reduces the anxiety associated with it. If it leads to another fear such as embarrassment, then make that the next fear in the first column and continue. See if you can get to a place of calm and security.

By consistently taking it down a notch for in-the-moment “life happens” events and using the “what if” technique for the more chronic, anxiety-inducing thoughts you’ll be far more likely to respond better, thus being less likely to feel a need to turn to food/alcohol/other drugs for comfort, you’ll feel more in control and you’ll experience less worry.