Research Reviews Impact of Overweight on Telomeres: Impress Your Friends and Learn This Term 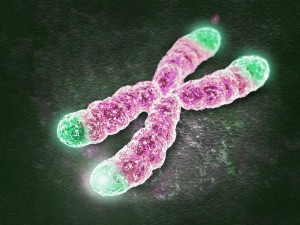 by David Greenwalt
Telomere (tel-uh-meer) from the Greek telos (end) and meros (part) are an essential part of human cells that affect how our cells age. Telomeres are the caps at the end of each strand of DNA that protect our chromosomes, like the plastic tips at the end of shoelaces. Without the coating, shoelaces become frayed until they can no longer do their job, just as without telomeres, DNA strands become damaged and our cells can’t do their job.
Hereditary, dietary, environmental risk factors and diseases like cancer and heart disease have been found to have an association with telomere length.
Obesity is also considered to be a major risk factor for telomere shortening. Research studies point toward the presence of an inverse relationship between being overweight and telomere length…the more overweight, the shorter the telomere length.
In a recent study Ruopeng An and Hai Yan assessed the association of body weight status and telomere length. They also studied the difference between men and women across three major ethnicities in the USA (Hispanic, non- Hispanic African Americans and non-Hispanic whites).
For this study they used data from the Health and Retirement Study (HRS), which, since 1992, has kept records of the health information of a sample population of U.S. community-dwelling adults above 50 years of age .
Study results showed that people who were 55 years or older at baseline (1992) and also who had suffered a stroke or had cancer, had significantly shorter telomere length (shorter is “bad”) in 2008. The results also revealed that overweight men were more at risk of telomere shortening as compared to overweight women. Amongst ethnicities, non-Hispanic men had the highest ratio of telomere shortening.
The most interesting, and surprising to the authors, finding that came out of this research was that the telomere shortening between the people with normal weight and overweight or obese at baseline was not significantly different. They had expected that overweight and obese individuals, over time, would have a shortening of telomere length.
The authors had a few possible explanations for this:

In conclusion telomere length is thought by some to be a measure of predicted longevity, however, much more needs to be learned to say whether telomere length can be used as a definitive measure of a long life and what, precisely, we can do to positively impact it. The surprising finding that those who were overweight or obese in 1992 had longer telomeres (a good thing) in 2008 just says we need more research to better understand this issue.
Source: An R, Yan H. Body weight status and telomere length in U.S. middle-aged andolder adults. Obes Res Clin Pract (2016), http://dx.doi.org/10.1016/j.orcp.2016.01.003