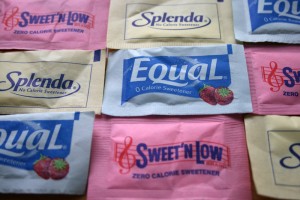 by David Greenwalt
It is no secret that Americans eat and drink a lot of added sugars.
High intake of added sugars has been linked to weight gain and diabetes, and is often cited as one of the causes of the obesity epidemic in this country. It makes sense, then, that many people are trying to cut down on how much sugar they eat.
Replacing sugar with non-caloric sugar substitutes, also known as non-nutritive sweeteners (NNS), is frequently suggested as a way to cut calories while still getting the desired sweet taste.
This article will look at evidence regarding whether replacing sugar with NNS can really help with weight loss, and what other effects these sweeteners may be having on us.

What are non-nutritive sweeteners (NNS)?

NNS are added to many foods and drinks that Americans consume every day, including:

Why do people use NNS?

The majority of people consuming NNS do so in order to reduce the amount of calories that they consume, likely with the hope of losing (or at least not gaining) weight.
While replacing sugar with NNS in a particular food or drink certainly decreases the amount of calories in that food, it is not as clear whether that translates into lower total calorie intake, lower weight and better metabolic health in people that consume NNS.
Bottom Line: The majority of people who consume NNS do so in order to reduce their calorie intake.

Can NNS help with weight loss?

Studies looking at whether NNS can help with weight loss have had mixed results.
While common sense would suggest that cutting calories by replacing sugary foods or drinks with similar products containing non-caloric sweeteners (for example, replacing regular cola with diet cola) would lead to weight loss, the actual effects do not appear to be that straight-forward.
One short-term intervention trial had participants substitute sugar in their diets with NNS. Participants lost weight during the trial, resulting in decreased body-mass-index (BMI) (3). However, most other studies have reported that using NNS results in little or no weight loss (4).
Other researchers have found an association in the opposite direction, linking NNS and obesity (5).
One study found that normal and overweight people who drank the most artificially-sweetened beverages (diet soft drinks, coffees and teas with NNS) were more likely to gain weight or become obese over a six- to seven-year follow-up period (6).
Given this mixed evidence, scientists are not convinced that NNS themselves clearly cause obesity. It may be that people who tend to gain weight or who are already obese use NNS more frequently than people who are not obese.
Bottom Line: There is not clear evidence that substituting NNS for sugar will lead to weight loss.

In an attempt to explain why NNS are not more clearly associated with weight loss, some researchers have suggested that sugar substitutes may cause increased cravings for sugary foods or other carbohydrates.
That is, even though we may use NNS to try to decrease calorie intake, they may increase our cravings and actually lead us to eat more food and calories.
When we eat or drink something sweet, our brains respond by releasing signals to eat more. If we respond to that signal by eating or drinking something containing sugar, or carbohydrates that are broken down through digestion into sugar, a reward center in our brain is activated. Our brains essentially got what they were expecting and hoping for.
Researchers studying sucralose, a NNS, found that it did not cause a similar activation of the brain’s reward center (7). So, while the intensely sweet taste of NNS tells our brains that a reward should be on its way, the reward never actually comes through. This may increase our craving for more sweet foods and drinks.
One study found that rats given a choice between cocaine and a saccharin-sweetened beverage preferred the saccharin, indicating just how strong the cravings caused by these super-sweeteners may be (8).
Bottom Line: NNS may increase cravings for sweet food and drinks.

Other metabolic effects of NNS

It has long been thought that NNS are a generally healthy substitute for sugar, since they have no calories and do not affect blood glucose levels. Recent research, however, has found associations between NNS intake obesity, diabetes and metabolic syndrome (9, 10, 11).
These finding have led researchers to question whether NNS are really as metabolically inactive as previously thought.
While it may be that individuals who are more likely to develop these diseases are simply more likely to use NNS than other people, it could also be that NNS are causing unintended metabolic changes that could put people at risk for disease.

When we taste food, or even just smell it or see it, our bodies prepare to begin the digestion process. Part of that response is to release insulin, a hormone that plays a crucial role in glucose metabolism and blood sugar levels.
It was long thought that, since NNS do not have calories, they would not elicit metabolic and digestive processes as would sugar or other carbohydrates. Now researchers are finding that may not be true.
While findings have been mixed, some evidence has suggested that intake of saccharin may result in increased release of insulin and increases in blood sugar levels (12, 13).
Studies using animal models have shown that, compared to rats given caloric sweeteners, those given NNS tended to have raised blood sugar following a meal (14). Rats given NNS also tended to weigh more, have more body fat, and take in more calories overall.
While humans are obviously different than rats and may respond to NNS differently, it may be that sugar substitutes somehow affect the normal processes of metabolism, blood glucose control and regulation of energy intake in humans as well.
Bottom Line: Even though NNS do not contain sugar, they may influence the way that our bodies react to sugar and other carbohydrates.

Although most of us never think about them, the bacteria that live in our intestinal tracts are essential for our health. Over 1000 species of bacteria reside in our guts, and they have many critical functions.
Functions of gut bacteria:

Non-nutritive sweeteners are generally recognized as safe and may be useful for diabetics or others trying to control their sugar intake.
However, there is no clear evidence that substituting NNS for sugar is helpful for people trying to lose weight, and use of NNS may even lead to more food cravings, weight gain and other negative metabolic consequences.
See my other article on this subject as well.