Being Overweight Does THIS To Your Memory 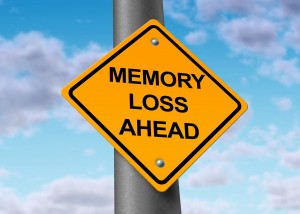 by David Greenwalt
Overweight young adults may have poorer episodic memory — the ability to recall past events — than their peers. This research adds to the increasing evidence of a link between memory and overeating.
In a preliminary study published in The Quarterly Journal of Experimental Psychology, researchers from the Department of Psychology at Cambridge found an association between high body mass index (BMI) and poorer performance on a test of episodic memory.
Although only a small study, its results support existing findings that excess bodyweight may be associated with changes to the structure and function of the brain and its ability to perform certain cognitive tasks optimally.
In particular, obesity has been linked with dysfunction of the hippocampus, an area of the brain involved in memory and learning, and of the frontal lobe, the part of the brain involved in decision making, problem solving and emotions, suggesting that it might also affect memory; however, evidence for memory impairment in obesity is currently limited.
“Understanding what drives our consumption and how we instinctively regulate our eating behaviour is becoming more and more important given the rise of obesity in society,” says Dr Lucy Cheke. “We know that to some extent hunger and satiety are driven by the balance of hormones in our bodies and brains, but psychological factors also play an important role — we tend to eat more when distracted by television or working, and perhaps to ‘comfort eat’ when we are sad, for example.
“Increasingly, we’re beginning to see that memory — especially episodic memory, the kind where you mentally relive a past event — is also important. How vividly we remember a recent meal, for example today’s lunch, can make a difference to how hungry we feel and how much we are likely to reach out for that tasty chocolate bar later on.”
The researchers tested 50 participants aged 18-35, with body mass indexes (BMIs) ranging from 18 through to 51 — a BMI of 18-25 is considered healthy, 25-30 overweight, and over 30 obese. The participants took part in a memory test known as the ‘Treasure-Hunt Task’, where they were asked to hide items around complex scenes (for example, a desert with palm trees) across two ‘days’. They were then asked to remember which items they had hidden, where they had hidden them, and when they were hidden.
Overall, the team found an association between higher BMI and poorer performance on the tasks.
The researchers say that the results could suggest that the structural and functional changes in the brain previously found in those with higher BMI may be accompanied by a reduced ability to form and/or retrieve episodic memories.
As the effect was shown in young adults, it adds to growing evidence that the cognitive impairments that accompany obesity may be present early in adult life.
This was a small, preliminary study and so the researchers caution that further research will be necessary to establish whether the results of this study can be generalised to overweight individuals in general, and to episodic memory in everyday life rather than in experimental conditions.
“We’re not saying that overweight people are necessarily more forgetful,” cautions Dr Cheke, “but if these results are generalizable to memory in everyday life, then it could be that overweight people are less able to vividly relive details of past events — such as their past meals. Research on the role of memory in eating suggests that this might impair their ability to use memory to help regulate consumption.
“In other words, it is possible that becoming overweight may make it harder to keep track of what and how much you have eaten, potentially making you more likely to overeat.”
Dr Cheke believes that this work is an important step in understanding the role of psychological factors in obesity. “The possibility that there may be episodic memory deficits in overweight individuals is of concern, especially given the growing evidence that episodic memory may have a considerable influence on feeding behaviour and appetite regulation,” she says.
Co-author Dr Jon Simons adds: “By recognising and addressing these psychological factors head-on, not only can we come to understand obesity better, but we may enable the creation of interventions that can make a real difference to health and wellbeing.”

Other research supports the findings of this article – that obesity can diminish memory. Okay, so what do you do? Reduce extra, unwanted fat and get out of the obesity class.
As a smoker improves lung function and capacity when they quit smoking I have no doubt that someone obese can improve memory (if impaired) by exercising, eating REAL food, reducing extra body fat and getting to somewhere in the vicinity of a healthy weight. Notice how I said SOMEWHERE as living at a perfectly healthy weight just isn’t going to be necessary to see improvements and, for most who are significantly obese, getting to “perfect” healthy weight isn’t going to be necessary to live the incredible life you desire.
Even a 5% reduction in unwanted fat can provide dramatic improvements in health and vitality but I’ll tell you what. My students routinely achieve 25% reductions in total mass (weight) if they’ve got it to lose. 5%? 25%?
Don’t worry about it. Just get started. If you’re obese it gets better really quick when you do it right.
Obviously I recommend Lifestyle 180 as classes become available. Lifestyle 101 is a starter course worth your time if Lifestyle 180 sessions are already in progress.