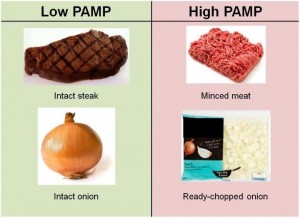 By David Greenwalt
As rates of many chronic diseases such as type 2 diabetes and heart disease consistently rise, far too many public health messages focus, wrongly and solely on sugar, salt and fat OR the macros (i.e., carbs, protein and fat).
A study published in Nutrition, Metabolism, and Cardiovascular Diseases reported that we may have to look beyond the nutrient composition of foods and toward the microbial makeup of them.
Evidence and good, common sense tells us that consuming foods such as processed meat rather than unprocessed meat is less healthy, increases inflammation and increases risks for diabetes and heart disease. But why? Researchers believe microbes in our guts produce molecules called pathogen-associated molecular patterns (PAMPs) when we eat processed meats.
Our guts contain more than a hundred trillion bacteria, with a high amount of PAMPs, but researchers previously thought that their role in inflammation was insignificant. But now they’re rethinking they’re position.
Researchers have discovered that processed foods contain a higher concentration of the bacteria responsible for stimulating PAMPs in our guts; perhaps these are putting us at risk. And it wasn’t just the highly processed “food” but minimally processed ones such as sliced onions stored in a fridge. The longer the item is stored, the higher the concentration of PAMPs.
Researchers in this study wanted to know if increased dietary intake of PAMPs caused changes in inflammatory markers, leading to increased inflammation and cardiometabolic risk among healthy people.
Test subjects were split into two groups to evaluate chronic and accute effects of dietary changes. Whether the test subjects were evaluated over 12 days or one day, when they were fed low-PAMP foods like unprocessed meat, fish and vegetables not only were inflammatory markers reduced but LDL (bad) cholesterol went down. When they were fed high-PAMP (processed) foods their inflammatory markers and LDL went up.
“In essence, we have discovered that contaminating molecules that arise in processed foods from the overgrowth of a specific type of bacteria during refrigeration or food processing can cause our immune systems to overreact in a manner that might be damaging to health when we eat foods containing these molecules,” reported author Dr. Clett Erridge.
Food producers will use this data to figure out ways they can make processed foods less worse for us. Sigh.

I wouldn’t worry about mincing an onion (processed) but go ahead and worry about eating processed meats and other food-like-substances the mainstream will still call food. Ideally 90 percent of your eating will be real, whole, healthy foods that aren’t processed. Endocrine and microbial disruption from eating food-like-substances are only a fraction of the problems with processed food-like-substances and, despite food chemists efforts, this will never change in our lifetime.
Journal Source:
Herieka, M., et al., “Reduced dietary intake of pro-inflammatory Toll-like receptor stimulants favourably modifies markers of cardiometabolic risk in healthy men,” Nutrition, Metabolism and Cardiovascular Diseases, 2015; doi: 10.1016/j.numecd.2015.12.001.