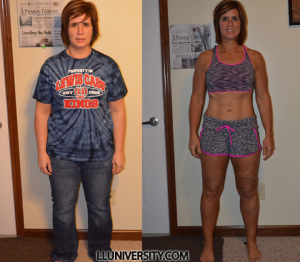 Lori Sailors, a 39 year old wife, mom and dental hygienist lost a total of 45 pounds with Lifestyle 180 and as a Leanness Lifestyle University student. Lori had done pretty much every diet gimmick out there. She’d done Weight Watchers ten times and lost weight with it only to regain it every time. Lori wrote me and had this to say about her experience.

After college is when my weight started to escalate. I started drinking alcohol with my friends and I ate out a lot. Food became my security blanket. It was my go to when I was sad or depressed.
Why did I join Lifestyle 180? At my work Christmas party Tosha Rogers had mentioned to me that she was signing up for Lifestyle 180 and I should do it with her. I thought long and hard about it for about a month. I hadn’t lost any weight since Tosha mentioned it in December, so I thought that maybe the program could help me. At the time I thought it seemed like a lot of money but I still thought it was worth a shot.
I was scared to sign up and I knew it would be tough. I was so afraid that I would fail again like every other diet that I had tried. I was terrified that I would get yelled at, but maybe I needed that! I overcame my initial fears and did exactly what Coach David and his Assistant Coaches said and I trusted their guidance along the way.
Now that I’ve graduated, 18 weeks later, I can honestly say I learned so much. I learned how to be a better, well-rounded person, to put myself first and to treat others how you want to be treated. Even if I do slip up and fail, I learned to fail forward and recover quickly.
I’ve learned that I’m a compulsive overeater and I’m learning to calm the irrational voice and put it in its place! I’ve discovered my trigger foods that I need to avoid. I learned the value of meditation and I’ve added resistance training to my workout routine. I know the power of a strong WHY, I know how to create and strengthen it and I use it to remind me why I am here and where I want to be.
I have had so much support from my family, friends, coworkers, my gym, other students of Lifestyle 180 and my facebook friends. They have been so supportive and encouraging along the way.
My body has changed so much. I have lost 45 pounds total and went from a size 16 pants to a size 8 pants. A size lg-xl tops to a size sm-med tops. People that I hadn’t seen in a while say that I look so good and they didn’t recognize me.
I have more of a positive outlook on life and have realized that I can conquer anything! I kept repeating to myself something I learned the true meaning of in the course – “Focus on what you want.” I wanted to hit this goal so bad and I was so focused! This class has taught me all of these amazing things!
I had told my mom that graduating from this class and hitting my goal was a life achievement and it was ranked up there with getting married and having my kids. She said that she had no clue that I was that bothered that much about being overweight. She was right, she didn’t have a clue and yes, it did bother me. I have gotten very emotional throughout this journey. I didn’t know that I could do whatever I set my mind to! I have so much more confidence now!
As I continue on I want to share with others all the good I’ve experienced. I’m even considering becoming a wellness coach. I am Lori Sailors and I am a Lifestyler!