Top 3 Reasons You Lose Weight While You Sleep 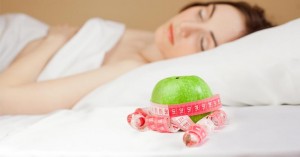 In a 2009 study researchers confined men to a bed with a built-in scale for 16 hours. They did not defacate or urinate during the 16 hours. The men lost about 1.9g/minute or about 1/4 pound per hour – about 2 pounds in 8 hours.
Assuming you go to bed at night and awaken in the morning you weigh less in the morning not only because you might have to get up and urinate or defacate during the night but also mostly because of:

The breath exhaled is moister (we lose water) than the breath inhaled as our lungs moisten the inhaled air.
At least one physics teacher, Derek Muller from Australia says we also lose weight from the carbon atoms we exhale. We breathe in O2 (two oxygen atoms) and breathe out CO2 (2 oxygen atoms + 1 carbon atom).
Source: How Much Weight Do You Lose During Sleep? |
Every Night You Lose More Than A Pound While You’re Asleep (For The Oddest Reason)