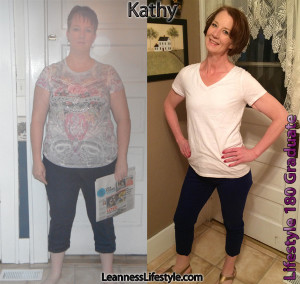 Kathy Canaday, an Admissions Manager at Memorial Medical Center in Springfield Illinois, lost 90 pounds with the Lifestyle180 course online at Leanness Lifestyle University!
At 5’10”, 46-year-young Mother of two Kathy was almost resigned to just being “big boned” and destined to either a life of obesity or bariatric surgery.
Kathy was a weight fighter in every sense of the phrase; she had been overweight quite literally from her earliest memories. She says “There wasn’t one time in my life when I was NOT overweight.” Weight was a daily concern and she felt held back from participating in life because of it.
Kathy says she’d tried about every diet you can imagine in the past; bananas only, grapefruits only, Weight Watchers, “every sad diet I could get my hands on.” She said she even resorted to creams and wraps at one point.
Prior to joining Lifestyle180 Kathy had peaked at 276 pounds in 2009 wearing a tight size 24. In 2013 she discussed bariatric surgery with her insurance company at work.
She felt at her wits end but decided to give the online Lifestyle180 course a try mostly because her co-worker Jenn Davis had lost more than 130 pounds with the Leanness Lifestyle University courses. Kathy says she couldn’t believe the transformation of Jenn on the outside but also Jenn’s inner transformation and improved confidence. Jenn, the same height as Kathy, was in-her-face evidence that formerly big girls aren’t necessarily big boned.
With her bariatric backup-plan in place, avoiding her doctor and on the blood-pressure watch list with her doc, Kathy began Lifestyle180 about 240 pounds (a tight size 22), but as she says, on the upswing once again toward what she says would have quite certainly been her heaviest weight ever. 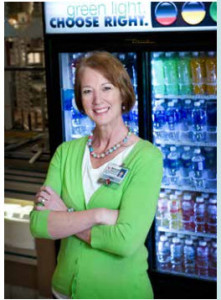 Kathy says, at first, she just thought that if she could get to 200 pounds that would have been a major milestone since she was “big boned.” One year later, now the lowest weight in her adult life, Kathy weighs 150 pounds. Although she couldn’t even imagine weighing 150 when she first began, she’s down 90 from her start with Lifestyle180 and wearing size 6 jeans!
Shopping for clothes is a whole new experience now. Kathy says she can go into any place and pick things off the rack that look good instead of just finding something that fits and covers her up.

Obviously thinner Kathy says it’s about so much more than that for her. She can do anything, can stand in front of people and be okay, she’s more centered knowing better who she is, she has more self-compassion and gratitude, is a better Mother, employee and person. Kathy says “I’m more in touch with it all.”

As someone who used to sit on the sidelines and watch others do things she’s now the one running around the park, able to run with her daughter who’s a track athlete in college. Kathy says she now has the freedom to go out and do whatever. She’s also no longer worried about running into anybody out in public; she has more confidence believing in herself enough to just let people take her as she is.
Kathy says she lived for years giving to others and pushing her own feelings back. By joining Lifestyle180 and working on herself, especially her emotional fitness, she now lives a much more enriching life with new confidence, happiness and every relationship she has also enriched.
Kathy’s advice to others who are presently where she once was is to take care of yourself first and enroll in the next Lifestyle180 course. “It’s well worth the time and well worth the effort.”