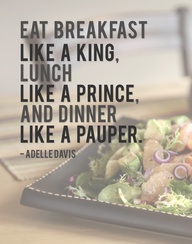 There’s an old saying that goes like this: Eat breakfast like a king, eat lunch like a prince, and eat dinner like a pauper. The idea behind this is that having the biggest meal of the day in the morning provides energy for the workday. In addition, the calories in foods eaten earlier in the day are processed more efficiently than those in foods eaten at night. The proposed benefits of eating this way include not only more energy for work or school but also weight loss. And, interestingly, recent research studies seem to support this idea.
In this article I’ll briefly address five studies that have recently reviewed the idea of meal timing and possible effects on weight loss and obesity. I’ll conclude with my personal observations and suggestions for practical applications.

In this 2012 study, Daniela Jakubowicz et.al., studied 193 obese, sedentary non diabetic adult men and women, averaging 47 years of age. They were randomized to a low carbohydrate breakfast (LCb) or an isocaloric diet with high carbohydrate and protein breakfast (HCPb). What this means is the calories of the two breakfasts were the same (isocaloric) and the primary difference was one was low-carb and the other was higher-carb with protein.
At Week 16, the groups exhibited similar weight loss (about 14 kg). From Week 16 to Week 32, the LCb group regained 11.6kg, while the HCPb group lost an additional 6.9kg. Ghrelin levels (a hunger-producing hormone) were reduced after breakfast by 45.2% in the HCPb group but only 29.5% in the LCb group. Satiety (fullness satisfaction) was significantly improved and hunger and craving scores significantly reduced in the HCPb group vs. the LCb group.
The authors concluded:

In this 2013 study, J. B. Wang et.al. studied 239 volunteers for associations of energy intake in the morning, midday and evening with body mass index. In other words, Wang et.al. were looking to see if it mattered whether energy consumed moreso in the morning, afternoon or evening impacted weight loss.
The authors concluded:

Researcher Marta Garaulet et.al., gained wide attention in 2013 with her study of meal timing and 420 overweight and obese Spaniards – both males and females. This study, like our Lifestyle 180 course, was 20 weeks. Also like my Lifestyle 180 course, this study included components of weight loss well beyond beyond calories in and calories out.
Dietary intake was assessed in all volunteers at the start of the study, and it was monitored during the entire 20-week-long intervention period. Individuals taking part in the study attended therapy sessions once a week. The treatment was based on four factors: dietetic treatment based on the Mediterranean diet, nutritional education, physical activity, and cognitive-behavioural therapy. In the Mediterranean population, the main, most caloric meal (40% of total daily energy intake) is ingested at lunch time. Based on the daily dietary-records documented by the volunteers, they were divided into two groups. There were those that consumed their main meal before 3pm (early eaters, 51%) or after 3pm (late eaters, 49%).
A wide range of biomarkers were monitored throughout the study. They included obesity and metabolic syndrome parameters, such as weight, height, total body fat and body fat distribution, as well as the levels of the appetite hormones leptin and ghrelin. Plasma concentrations of glucose, cholesterol, triglycerides and lipoproteins were also assessed. To determine the energy expenditure, volunteers were asked to record their activity levels.
Following 20 weeks of the intervention, although both groups lost weight, late lunch eaters lost significantly less weight (7.7 kilograms on average) than early lunch eaters (9.9 kilograms on average). It was also observed that late eaters showed a slower rate of weight loss after five weeks of the treatment and this difference was maintained during the remaining period of the study. The differences in weight loss between the groups came as a surprise to the researchers, since there were no significant differences in total energy intake or energy expenditure between late and early eaters. This indicates the timing of food intake as a critical factor.
The authors concluded:

“In summary, eating late may impair the success of weight loss therapy. Unexpectedly, total energy intake, dietary composition, and estimated energy expenditure were not explaining these results. The current findings may help in the development of novel therapeutic strategies incorporating not only the caloric intake and macronutrient distribution-as is classically done-but also the timing of food.”

This 2014 study was published in the American College of Nutrition. 42 subjects were split into two groups of 21. Both groups were put on hypo-caloric diets with a goal of weight loss. Group 1 ate 70% of their calories by lunch time (25% of daily calories at breakfast) with 30% of their calories after lunch. Group 2 ate 55% of their calories by lunch (15% of daily calories at breakfast) and 45% after lunch.
Group 1 subjects lost more weight, more fat and had smaller waist circumferences over the 3-month evaluation than group 2 subjects.
I found something the authors stated quite interesting – it’s the first time I’d seen it. They wrote …

“The satiating power of morning meals can be explained by evolutionary theory, hormone theory, and metabolic theory. Earlier in human evolutionary history, the loss of light in the evening significantly limited activity. In modern times, however, the extensive use of artificial lighting has allowed people to remain active as well as eat late into the night. Thus, obesity in recent evolutionary years could be explained due to eating in the evening when satiation is weak.”

The authors pull no punches in making a recommendation to physicians treating overweight patients …“One clear communication from physicians could be “If you want to lose weight, eat more in the morning than in the evening.”
Results of a 3-month lifestyle intervention including a low-calorie Mediterranean diet with a greater caloric intake in the first part of the day could establish a greater reduction in fat mass and improved insulin sensitivity than a typical daily diet.

In the real world, with boots on the ground, I and legitimate educators, therapists and Coaches, have routinely dispensed advice to reduce carbohydrate or total caloric intake in the evening. While nothing works perfectly for everyone, the chronically lean, in my experience, follow this advice.
Until recently scientific thinking tried telling us that a calorie is a calorie is a calorie. For fifteen years I’ve argued the opposite. In addition, until recently, scientific thinking has been that it doesn’t matter when you get in your calories (energy) it’s the total energy intake over 24 hours that matters. Again, in the real world, based on my observational experience, I argued this was not the case – that there was at least some benefit to: 1). Spreading your meals to between three and six per day for optimizing blood-sugar and insulin balance as well as perceived mental energy and 2). Going lighter in the evening, especially with carbohydrates because the need for energy is simply less as we close in on bed time.
I used to consume a popcorn-bowl sized serving of sugary cereal within an hour of going to bed. Fifteen years ago it wasn’t uncommon for me to bring a box of Golden Grahams to the couch at 10pm just so I wouldn’t have to go back to the kitchen three times to refill my bowl with cereal until there wasn’t a drop of milk left to soak it up. Not surprisingly, I was fat.
Once I traded in that gluttonous zone-out habit for a leaner lifestyle I still made sure I had some kind of snack before bed. To this day I don’t like going to be hungry and I don’t advocate going to bed hungry. Instead of a trough of cereal, however, I have a piece of lean protein or protein powder mixed in water or a small apple and some measured nut butter of some kind or even a tablespoon of fish oil.
I live under 10 percent body fat all year and have for years but when I am at my leanest I eat a reasonably-portioned dinner that includes protein and mostly low-sugar, fibrous carbs (e.g., asparagus, broccoli, cauliflower, greens, peppers) rather than higher-sugar starchy carbs (e.g., potatoes, rice, pasta, acorn squash, fruits). I cannot say my dinner is that of a “pauper.” It’s about the same size as my breakfast or lunch give or take 20 percent on any given day. But after dinner, when I’m at my leanest, I do NOT consume many carbohydrates of any kind whatsoever and, when I’m at my leanest, my total caloric intake after about 6pm is truly that of a pauper.
While I cannot say I had thought of circadian rhythms it has always made intuitive sense that as we get closer to bed time we don’t need the energy (calories) compared to what we need when we’re active and busy during the day.
Meal timing may not be the make or break in the grand scheme of things. But the way I see it is if we can gain a 2-5% weight-loss or stay-lean advantage simply by making sure most of our caloric intake occurs earlier in the day rather than later then let’s get in synch with our whole-body and individual organ circadian rhythms and work more with our bodies rather than against.
Study 1 Reference: Jakubowicz D, Froy O, Wainstein J, Boaz M. “Meal timing and composition influence ghrelin levels, appetite scores and weight loss maintenance in overweight and obese adults.” Steroids. 2012;77(4):323-31.)
Study 2 Reference: Wang J.B., Patterson R.E., Ang A., Emond J.A., Shetty N. & Arab L. (2013) “Timing of energy intake during the day is associated with risk of obesity in adults.” J Hum Nutr Diet.
Study 3 Reference: Prof Marta Garaulet, Purificaci¢n G¢mez-Abell n, PhD, Juan J Alburquerque-B‚jar, PhD, Yu-Chi Lee, PhD, Prof Jose M Ordov s, and Prof. Frank AJL Scheer “Timing of food intake predicts weight loss effectiveness” Int J Obes (Lond). 2013 April; 37(4): 604-611.
Study 4 Reference: Garaulet M, Gomez-Abell, “Timing of food intake and obesity: A novel association” Physiol Behav (2014)
Study 5 Reference: Mauro Lombardo MD et.al., “Morning Meal More Efficient for Fat Loss in a 3-Month Lifestyle Intervention” Journal of the American College of Nutrition (2014)