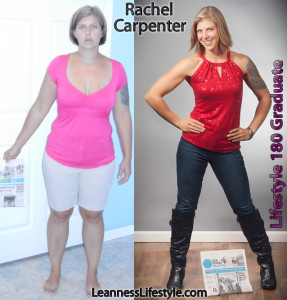 Wife, stay-at-home Mom and book-cover designer Rachel Carpenter lost more than 50 pounds with Leanness Lifestyle University and says she feels a thousand times better on the inside than anything we see on the outside.
For 20 years, since high school, Rachel fought her weight. She says the Freshman 15 for her were more like the Freshman 30. After graduating high school in the 145-150 range she reached a peak of 222 pounds at the age of 38. At that time, in addition to being far heavier than she wanted to be, she was also smoking a pack of cigarettes a day, drinking a giant bottle of rum every week, was on anti-depressants, had climbing blood pressure and just felt miserable.
In 14 months Rachel lost about 10-15 pounds on her own. Then Rachel found Lifestyle180. She lost 50 pounds during Lifestyle180, an 18 week course, and maintained her weight during the most recent holidays.

Today Rachel is a non-smoker, she has run four half-marathons, the most recent at a pace of under 10-minute miles, she’s wearing a size 4 instead of 18, her blood pressure is excellent and her confidence has increased greatly.

Rachel admits she had a lot of doubts before signing up for Lifestyle180 that first time. Rachel says she felt so bad prior to starting, had been trying so long on her own and failing, that she just didn’t feel there was anywhere to go but up. She doubted whether she could do it. She even doubted that she’d be accepted into the course. She was concerned about the cost too since they are a one-income family. Ultimately, she pushed the enroll-now button, not so much because she believed in herself or felt she was worth it, but because she felt those closest to her deserved better from her. Now, as she leads and lives by example, the whole family benefits. Rachel says that she continues the journey not only for those who she loves and who love her but for herself. Now she matters too..
In the interview you’ll hear Rachel get a little emotional as she thinks about someone listening to her interview and, knowing how good she feels now, reflecting back to how bad she felt when she started and knowing someone listening hasn’t started yet and feels just as bad. Please listen to the 43-minute interview to hear Rachel’s own words and advice about what to do. You will be inspired, you’ll chuckle and you’ll learn how Rachel faced her challenges head on to create the amazing success you see in the picture here but, as she says, 1000 times more on the inside.