Valter Longo, the founder of L-Nutra, a company that promotes and sells diet and longevity foods and supplements, was involved in a study titled “Low Protein Intake Is Associated with a Major Reduction in IGF-1, Cancer, and Overall Mortality in the 65 and Younger but Not Older Population.”
Longo’s L-Nutra company promotes intermittent fasting as a pathway to health and longevity and their products are seemingly designed to assist with, and mimic, the proposed benefits of intermittent fasting. Data from the L-Nutra website states … 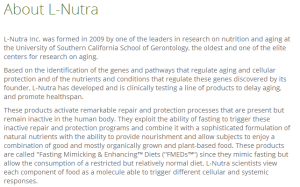 These products activate remarkable repair and protection processes that are present but remain inactive in the human body. They exploit the ability of fasting to trigger these inactive repair and protection programs and combine it with a sophisticated formulation of natural nutrients with the ability to provide nourishment and allow subjects to enjoy a combination of good and mostly organically grown and plant-based food. These products are called “Fasting Mimicking & Enhancing™ Diets (“FMEDs™”) since they mimic fasting but allow the consumption of a restricted but relatively normal diet. L-Nutra scientists view each component of food as a molecule able to trigger different cellular and systemic responses.

The recent research sparked a frenzy of media headlines like “Eating large amounts of meat, cheese may be as deadly as smoking, study shows” and “High-protein diet ‘as bad for health as smoking’”
As of this writing it’s still very early in the news cycle of this research, press release. I’m not a researcher. I’m a Wellness Coach. I don’t have all the answers. I do, however, believer there are some points worth considering before anyone runs off half cocked screaming the “meat is death” message like an orangutan with its hair on fire.

There’s an obvious conflict of interest with this current research. Longo, one of the authors, promotes intermittent fasting, calorie restriction and his own line of food-based supplements to promote health and longevity. Does it mean it’s bad science? Not necessarily. But it cannot be ruled out unless Longo isn’t human.
If you eat lots of processed red meat or you eat lots of red meat without plenty of vegetables and fruits you are likely increasing your chances of obesity, cardiovascular disease, diabetes and early death. If your lifestyle is full of processed, chemically-laden food, plenty of alcohol, no exercise and rich in tobacco products? Good luck. I don’t think you need more research to tell you you’re high risk for disease, cancer and early death.
No research has been conducted with a population who limits all processed Frankenfood from any source, who eat REAL food, who consume mostly grass-fed, pastured, free-range and wild-caught animal-flesh, who also consume plenty of vegetables and some fruit, and who get in 150-300 minutes of aerobic and strength-training exercise each week. This is my world and the lifestyle I promote to my clients. Until that study is done? Correlation does not equal causation. I will say, however, that I should get more of my protein from fish. Always something to improve.