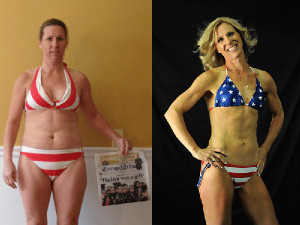 Mary Battin, a 50-year old from Illinois lost and kept off 36 pounds with Lifestyle 180!
A busy, widowed Mother of two teenage boys, Mary works long hours as an Operations Manager for an upstart restaurant company. But nothing was going to stop her once she made her mind up that being 5’3″ and weighing 150 pounds was no longer okay.
Mary’s history with weight was one of gaining the Freshman 15 in college and, gaining 65 pounds during pregnancy, and living most of her 30s in the 140 range and 40s in the 150s. She says she had gotten almost blind to where her weight was or what she looked like. She had tried Herbal Life, Weight Watchers and a few other programs losing some weight but always gaining it back each time.
Finally in January of 2013 Mary had had enough and decided it was time to do something about her weight. She mentioned her goal to lose weight to a few close friends and one thing led to another. A friend of hers who had already lost 40 pounds with Lifestyle 180 strongly suggested she give it a try as did her trainer. That was all it took.
Mary says when she began Lifestyle 180 in February of 2013 she had been suffering from migraine headaches about once a month, sinus infections every other month (causing her to be on antibiotics for what seemed like all the time) and, as an avid runner, she had been experiencing hip pain for months. She says she felt an almost immediate boost in her energy when she began the course.
In all Mary started Lifestyle 180 weighing 147. Although her original goal was 120 pounds Mary graduated the course 20 weeks later weighing 111. Six months after graduating Lifestyle 180 Mary has maintained her graduation weight!
As Mary got leaner and stronger, working closely with her personal trainer for strength-training programming, she competed in Tough Mudder and other mud-obstacle runs. She says it felt so good to first, be able to complete those runs, but secondly to be able to run and clear obstacles faster than many men and women 20 years her junior.
Beyond competing in mud-obstacle runs Mary gave her competitive show-woman spirit a 180-degree difference in “flavor” by doing a bikini competition in November 2013. Mary says prior to getting in great shape with Lifestyle 180 she had no desire to compete in a bikini show nor did she think she’d feel good about it.
No longer suffering from migraines, sinus infections or nagging hip pain, Mary says she plans to continue competing in both tough mudders and another physique competition – this time moving up to Figure which requires a bit more muscle than bikini.
Give my 28-minute interview with Mary a listen. She has an infectiously positive and energetic personality and I believe, as she says, that you will feel even more confident that if she can lose the weight, keep it off and compete in opposite forms of sporting fun at the age of 50 you can too!