Dr. Deborah Johnson M.D. Proves It's Never Too Late To Get In Shape! 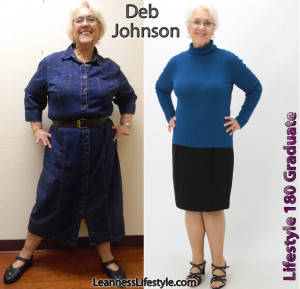 Dr. Deborah Johnson M.D., at the age of 65, joined Lifestyle 180 and lost 62 pounds in one year!
A still-practicing gynecologist, Dr. Johnson says she has been a veteran weight fighter since the age of 11. She clearly remembers being taken to her pediatrician and being put on a weight-loss medication. During those tender years she remembers always being the last to take a lap around the track in school.
Dr. Johnson played volleyball and basketball in high school and graduated weighing about 150 pounds. In college, however, she gained about twice the Freshman 15 and it only got worse when the incredible stresses of medical school presented.
She began her residency weighing 208 but gained and lost 30-50 pounds numerous times after that. Finally, after a stressful new-baby adoption and other life stressors Dr. Johnson found herself at 307 pounds at the age of 50 in 1999. Too embarrassed to see her own physician she lost weight until she was back under 300. It was then she discovered she was hypertensive, pre-diabetic and asthmatic. In all, eventually, she was taking four blood pressure medications to maintain control of her hypertension.
Throughout the years Dr. Johnson tried the HCG diet, E-diets, Michael Thurman, Jillian Michaels and more. Finally, at the age of 65, after sitting on the Leanness Lifestyle University sidelines (a.k.a., she was on our mailing list but never signed up), she decided “I need to get this done.”
Dr. Johnson joined Lifestyle 180 in February of 2013 weighing 218, on the lower end of her 30-pound range, and a frequent sticking point. 20 weeks later she was 178 pounds! 32 weeks later she weighed 156 pounds! She says it feels “exhillarating” and she’s excited to now be able to make her body do all sorts of things — even strength training which she had never seriously tried before.
As for what helped her get through the rough spots? Dr. Johnson says it was two things primarily: 1). The strength of the Leanness Lifestyle community and how supportive everyone was including peers and Coaches and 2). She knew I was invested in her and I would be crushed if she failed. I’m glad she felt the strength of the community and she was right about me taking it personally when a student fails. I’m invested in my students–to a fault.
Dr. Johnson is down to one medication for blood pressure and, as she says, it’s really more for prophylactic purposes than treating a medical concern. She’s no longer pre-diabetic and she hasn’t had an asthma issue in over nine months!
Dr. Johnson paid me two of the greatest compliments a student ever could – what a gift they both were. When I asked her to say whether someone listening should take a chance on my course and themselves a part of her answer included “Global, comprehensive, lifestyle education” as she described the program. That is so special to me because that’s exactly what my vision of what I am trying to provide is. The second compliment was when she said she kept going during the rough times partly because she didn’t want to let me down because she knew I was invested in her personally.
I tell ya, I can exhale and smile at least for a moment, if I know I’m conveying a “global, comprehensive, lifestyle education” and my student-clients know I’m personally invested in them. Thank you Dr. Johnson – those sentiments and thoughtful words mean the world to me.
There’s a lot more shared as I interviewed Dr. Deborah Johnson M.D. for 38 minutes about her amazing transformation inside and out. Give it a listen and you’ll feel inspired. Dr. Johnson is living proof that age is just a number and it’s never too late to get in great shape!