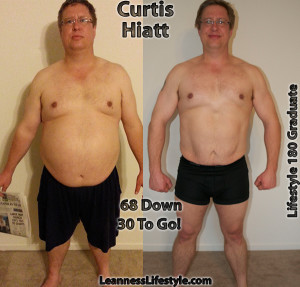 Curtis, a 43-year old customer rep, began Lifestyle 180 at 280 pounds and finished at 213 pounds — losing 67 pounds! Curtis says his work environment, like so many, is very obesity promoting – with candy carts and more routinely being provided.
Curtis says he no longer uses food to manage mood or to compensate for emotional ups and downs. Prior to beginning the course Curtis was borderline hypertensive with nagging knee and feet issues. His Father died from diabetes at the age of 52 and that pain had been an ever-present fear within him that gnawing at him to take better care of his health.
Although there were some nutritional rough spots, periods during the course when he felt like pushing back and resisting the guidance, Curtis says he eventually did embrace it and is so glad he did. He was still able to work in some of his favorite foods too like pizza, hamburgers, ice cream, alcohol and chocolate. Curtis says “I never felt deprived.”
The biggest benefit from taking the course, Curtis says, is just how good he now feels about himself. He says that how he interacts with other people, the world and how he feels about himself have all improved greatly. While he used to barely stay awake after 3pm now, he says, he barely needs six hours of sleep a night because his energy is so high.
Curtis is continuing with Leanness Lifestyle University to lose an additional 30 pounds and promises he’ll submit After photos when he has “arrived.” 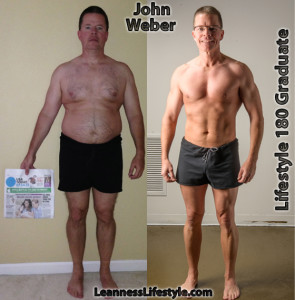 John Weber, a 50-year old actuary from Indiana has been married for 23 years and has two boys 19 and 15. His boys are actively involved in Boy Scouts and other actitivies and, as you might imagine, his family demands that he’s on the go quite a bit.
John began Lifestyle 180 at 208 pounds and finished at 172, a 36-pound loss! After two family members had heart attacks before the age of 50 John was always, not unlike Curtis, living in fear that his unhealthy habits might lead him to suffer from the same fate.
Now that he’s at goal weight and lean John says he no longer looks in the mirror each morning and says “I’ve got to do something about this.” He says he feels really good, that he’s really accomplished something, he’s at peace and has more energy. Whereas he used to nod off after lunch now he has more than enough energy to carry him through the day with more focus and mental alertness too.
John does all of his online work with his iPad now that the course is entirely mobile, tablet and desktop friendly. John is committed to continuing at Leanness Lifestyle University to maintain his weight and even plans to compete in a bodybuilding competition in May of 2014. We look forward to attending and supporting John if he chooses to follow that goal.
There’s a lot more these two fine men shared as I interviewed them for 59 minutes. Give the interview a listen. You will feel inspired. [Note: I also liked how both guys shared what online apps they are using for their strength training workouts. They each use a different app and, I’d say, equally like the apps they’re using.]