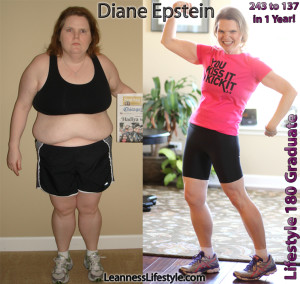 Diane Epstein, a 38 year retail buyer from the Chicago land area lost 117 pounds in one year with evidence-based weight loss at Leanness Lifestyle University (LLU)!
From the age of five Diane packed on the weight. After her parents divorced she soothed the pain with food. Not having positive healthy role models in her life the pattern of “stress equals food” became all she knew.
Diane says, as a child in elementary school, she remembers having to go weigh in with all the students periodically. One of the most horrifyingly embarrassing things was that the person doing the weighing would call out the weight outloud for each student. She says she doesn’t remember what she weighed – just that she was mortified that her weight was always the highest of any student – boy or girl. She was the heaviest in her class. She was always the heaviest in her class. At the age of 12, in eighth grade, Diane said she remembers wearing a size 14.
For many years in her 20s and 30s Diane weighed in the 200-210 range. The lowest weight she can remember prior to finding LLU was 163. On her 5’5″ frame her lowest weight prior to LLU still meant she was overweight. Diane says since everyone in her family is heavy she thought it was her genetics or bone structure.
On New Year’s Eve, 2013 Diane weighed herself and found she was her heaviest weight ever – 255 pounds. She would get out of breath just going upstairs in her two-story home. Her arms would get sore from doing basic housework. She reluctantly had gone to the doctor, scared to death at what the doctor might say. Sure enough she had high blood pressure for the first time, after it in years prior had always measured quite low. She was also diagnosed as an asthmatic and was prescribed an inhaler.
Diane was introduced to LLU through her brother and sister in law. They both had participated in Lifestyle 180 and had lost 75 pounds each. Diane says she had watched them become successful from afar. She says that even though she saw them becoming successful, she continued to try Weight Watchers and other programs. She’d lose 30 pounds and put it back on and more every time. Like so many others Diane tried just about everything out there before LLU.
As a buyer for one of the largest retailers in the country she, during one of her most aggressive weight-loss phases, had to travel for the first time ever to China. Even so, Diane as nervous as she was about the trip, was able to lose eight pounds in 10 days while away in a foreign land!
In all? Diane started Lifestyle 180 in February of 2013. As of today, about one year later, Diane weighs 138 pounds — she has lost 117 pounds! She wore a 3X and sizes 20-24 one year ago. Now she wears sizes 0-4!
Diane and her husband used to eat out every meal every weekend. Now they cook together, workout together and shop at the Sports Authority and Under Armour stores together. These are things she is doing now, that one year ago, Diane says she couldn’t imagine doing. She is no longer winded going up stairs. Now she runs 9-minute miles for 10 miles! Her arms no longer hurt doing routine house cleaning. She’s no longer asthmatic. She no longer has high blood pressure.
Diane says one of the most surprising things for her has been the improvements in her relationships with others. She’s a lot more social and she’s made new friends within the LLU community and outside that community as well.
There’s a lot more to tell and no better person to tell it than Diane. Give my 70-minute interview with Diane a listen and get ready to be inspired!