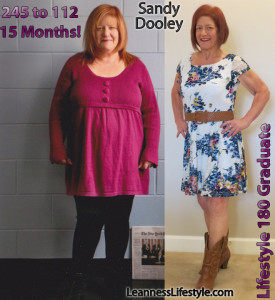 Sandy Dooley, a 58-year young (and I mean young) preschool teacher from Georgia lost 133 pounds in 15 months with courses she took from Leanness Lifestyle University!
Always a chubby child, after gaining 60 pounds with a pregnancy, Sandy never really got back to a reasonable weight for her 4’11” frame. Between ages 48 and 57 she spent most of her time in the 200-pound range give or take 20 pounds.
Sandy says she did about every program there was, even one she calls the “diet police” where she buddied up with a friend and they called each other for support and accountabilty. She even did her own “one-thing-a-day” diet where she could eat anything she wanted but only one thing, one time a day. She lost weight but always gained it back and more.
At the age of 53 Sandy says she got a scare when a stint had to be placed in her heart to relieve a blockage. She lost 60 pounds after the procedure but put those 60 back on and more. At 57 years of age Sandy topped the scale at 245 pounds. That was September of 2012 when she found Leanness Lifestyle University.
Sandy says it was rough going at first. She had high blood pressure and arthritis in her knees (needing to take gel shots just to get some relief). It took 45 pounds of weight loss before even one person verbalized they noticed.
By June of 2013 (9 months later) Sandy had lost 99 pounds! She said she really tried to melt off that last pound to hit 100 pounds by her graduation from Lifestyle 180 but it didn’t quite happen. She finished Lifestyle 180 at 146 pounds and felt like she was really close to her goal.
After some further self-evaluation and Coaching Sandy decided she’d go a little lower and just see how it felt. She continued her education and support with Leanness Lifestyle University and a total of 15 months since she weighed 245 Sandy now lives in wonder, amazement and awe at her 112-pound body.
Beyond the physical changes Sandy says it’s how she feels on the inside and who she is as a person that is the most rewarding.
Now, instead of no one noticing her weight loss everyone close to her keeps telling her to stop losing because she’s “too skinny.” She exercises as much as she wants keeping up with 20-year olds. Her blood pressure is normal. The meds are gone. She’s dating. She can wear tight-fitting clothes and she loves how everything just fits.
Consistently a top student at Leanness Lifestyle University, Sandy now wants to maintain her weight and give back to other women who, like her, didn’t have positive role models for wellness in their lives growing up.
Press the play button or download the MP3 audio interview I did with Sandy for a lot more!