In conversing with a male student the other day I was responding off the cuff as usual about his question to me of finding the perfect routine to help with some partial tears in his rotator cuff. 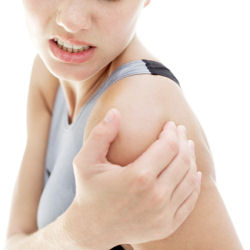 I’ve never gone under the knife for my MANY joint injuries over the years. It doesn’t mean in a perfect 100% insurance-covered world that I shouldn’t have. If we went purely by physical therapist standards I can all but guaran-damn-tee you I SHOULD have gone under the knife for a shoulder injury or two over the years.
When should you go under the knife? When should you just work around it and let it heal? I’ll always recommend, if the pain is high and doesn’t settle down in a week, go to a medical practitioner and get evaluated if you can. That’s a perfect-world answer. The reality is 30+ million are uninsured and tens of millions more are under-insured with just major-medical (that’s me).
Generally speaking medical professionals know best and you won’t know until some pics are taken (MRI usually). But an MRI can easily run $5k a pop. Good luck if you don’t have good insurance.
So what do you do? Well there’s no magic-bullet answer. And here’s what I told my student about it …
===============
The problem with putting together a routine is it’s going to hurt for months no matter what. Get surgery? Gonna hurt for months. Don’t get surgery? Gonna hurt for months. Surgery? May fix it. No surgery? May just prolong eventual healing and ability to move with maximum effort – then again, surgery may not fix it and you may just go under the knife, hurt, and still have limited range of motion and/or “oochy ouchy” pains from time to time. No guarantees.
When my shoulder has hurt over the years I didn’t change my routine and then all of a sudden become pain free. All I did was change my exercises and hurt less than I did. That continued for around 3-6 months and it just depends on the injury – it usually gets better in time with the change of exercises that don’t make you say “Mother f*^!er that hurt!” Avoid that phrase if you can. 🙂 So if you aren’t saying MF-that hurt you are probably going to let it heal as best it can over 3-6 months. But there is no magic workout routine – you workout around it and avoid MF-that hurt! pain.
If range of motion becomes too limiting or painful for everyday life and work and sleep then medical treatment becomes less of a choice and more of a must. But keep in mind this – it’s VERY common to have limited range of motion and pain for a good week as the inflammation tries to get you to NOT move the joint. It’s a natural body response and works pretty damn well. The pain says “Don’t do that! I need some rest.”
Ice the affected area for 20-30 mins multiple times a day or whenever you feel the pain at its worst (e.g., after a workout). You can take over-the-counter anti-inflammatories for a week to 10 days but you shouldn’t be living on them. They are TERRIBLE for the gut lining (Can you say ulcer and bleeding?) You may also get a prescription for better/stronger anti-inflammatories from your doc too.
Another thing you can do is get deep-tissue massage. Is it a proven cure? No but it feels good during, that’s a very good thing, and it may help. At the very worst? It’s like chicken soup for a cold – may not cure it but it certainly doesn’t hurt it.
I’ll tell you a secret. I only do three movements for chest – THREE. It’s true. And I’ve only done three movements for about five years now. That’s because of an old, nagging shoulder injury from years ago. I do these movements only:
1. Incline bench (dumbbell and barbell)
2. Dips
3. Pushups
That’s it – period. I still get some pain but it’s livable and I have kept every precious drop of chest muscle in all these years of ONLY doing those exercises. While I’m on a roll keep this in mind too as many of you think you have to do 10 chest exercises per workout to build a chest. It’s not true. If anybody tells you different it’s just a bunch of bull.
For joint-pain options you can also print off and read this document I created YEARS ago. http://www.leannesslifestyle.com/download_pdfs/joint_pain_options.pdf
When you read that document you’ll have a really good sense of how you can adjust tempo, body-position and hand-position to reduce pain and having to say “Mother F*^!er that hurt!” Everytime you say “MF that hurt!” you are setting yourself back in recovery. This is not a time when “No pain – no gain” is valid.
It’s also NOT realistic to lead an active actively-fit lifestyle and be totally, 100% pain-free if you’ve injured a joint. Most times you do NOT need to totally quit exercising and joint pains are oftentimes used as an excuse to “take-r easy for a few weeks.” I’ve had serious joint pain over the years but I never stopped working out. I blew my ACL in my left knee twice and still worked out upper body. Sitting down and “taking-r easy” is usually NOT necessary.
In conclusion there IS going to be SOME pain while recovering – there just is. But there’s also going to be pain if you go under the knife. There just is. Avoiding activities that create stinging pain and “MF that hurt!” pain is a must for recovery and MOST times, given time (months, not days), the body WILL heal if you work around the pain going lighter, reducing intensity, adjusting body- hand-positions, slowing tempo, taking anti-inflammatories and using ice liberally.