Men lose more muscle mass and strength than women as they age. It’s thought this is related to decreasing testosterone levels.
A recent study found that higher levels of testosterone were associated with reduced loss of lean muscle mass and lower-body strength in older men, especially in those who were losing weight.
Unfortunately when you say testosterone the first thing that pops into most peoples’ heads is juiced up men in roid rage. If not this image then it’s the professional sports hero “cheating” to win. But the reality is testosterone is a master hormone in the male body and is just as important as thyroid and insulin for living healthfully with vitality as men age.
Just because a man is 65 doesn’t mean he should be on supplemental testosterone. And just because a man is 30 doesn’t mean he shouldn’t. The only way to know is to get checked.
Most doctors, absent complaints, won’t check for testosterone levels with routine physicals. The solution to this truth is simply to ask to be checked. Get a total testosterone, free testosterone and estradiol check at a minimum. You can ask your personal physician to add it to any blood-test panel or if you don’t want to go see your doc about it you can order a test and go to a local lab for your blood draw.
If you have to pay for a complete blood count including testosterone checks it’ll run you about $225. I’ve been ordering blood tests for men for many years now. It’s simple and private. Here’s where you go to get a test ordered if you aren’t going to see your local physician anytime soon. http://www.hrtexperts.com/
One of the study authors is quoted at Science Daily with this … “Our study adds evidence to the growing body of literature that suggest higher levels of endogenous testosterone may be favorably associated with some key components of healthy aging in men.” (1) 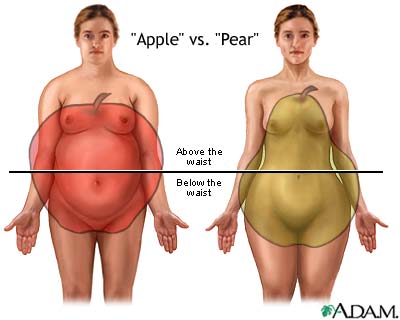 Apples and pears – these are two body shapes most of us are familiar with. Most men are apples. They carry their fat disproportionately around their abdomen with toothpicks for legs. Fewer men are pears where the fat is disproportionately distributed in the lower body.
In women the body shapes are a a lot more diverse. There are apples, there are pears and there are simply combinations of the two.
Abdominal fat is thought to be easier to lose and less resistant to the efforts of caloric restriction and exercise compared to lower-body fat. But one not-so-cool thing about abdominal fat in women according to some research is that abdominal fat, especially the fat deep under the skin that lies around the organs around the midsection, can provide nutrients that promote the spread and growth of ovarian cancer, the fifth leading cause of cancer deaths in women.
“This fatty tissue, which is extraordinarily rich in energy-dense lipids, acts as a launching pad and energy source for the likely lethal spread of ovarian cancer,” said study author Ernst Lengyel, MD, PhD, professor of obstetrics and gynecology at the University of Chicago. “The cells that make up the omentum contain the biological equivalent of jet fuel. They feed the cancer cells, enabling them to multiply rapidly. Gaining a better understanding of this process could help us learn how to disrupt it.” (2)
Who cares? Why does this matter? I say it simply adds one more reason to lose the excess fat.

Meditation works. It’s proven to work. Even mainstream medical doctors are found recommending it. But how does it work? A new article published in the latest issue of Perspectives on Psychological Science, a journal of the Association for Psychological Science, draws on the existing scientific literature to build a framework that can explain the positive effects of meditation.
The authors specifically identify four key components of mindfulness that may account for its effects: attention regulation, body awareness, emotion regulation, and sense of self. Together, these components help us attend to and deal with the mental and physiological effects of stress in ways that are non-judgmental. (3)
There are many ways to engage in meditation. I use audio but I’ll be honest I need to and want to learn more about how to get good at it. It truly is something I’m too weak at when I consider all the research supporting its usefulness and positive effects on mood, stress and health. This is a time when I’d tell you “Don’t be like me. Be better than me.” I’ve got to add this to my “to do” list and conquer this soon. It’s simply been too long being ignorant. Even the little I do helps. Getting good at it would only be even better. I know this is true. It’s time.

It was October 6, 2011 when I wrote about a surprise research finding that fish-oil consumption might INCREASE high-grade prostate cancer risk. This was a surprise to the researchers because other research showed a decreased prostate-cancer risk or development in those who consumed more fatty fish high in omega-3s.
Now here we go again–but the other direction.
Men who ate a low-fat diet with fish oil supplements for four to six weeks before having their prostate removed had slower cancer-cell growth in their prostate tissue than men who ate a traditional, high-fat Western diet, according to a study by researchers at UCLA’s Jonsson Comprehensive Cancer Center. (4)
“You truly are what you eat,” said Aronson, a clinical professor of urology who also serves as chief of urologic oncology at the West Los Angeles Veterans Affairs Medical Center. “Based on our animal studies, we were hopeful that we would see the same effects in humans. We are extremely pleased about our findings, which suggest that by altering the diet, we may favorably affect the biology of prostate cancer.”
The authors aren’t definitively saying fish oil is great for the prostate. The study was relatively short and small in size. But it does just go to show that one study doesn’t say it all 99 percent of the time.
For now? I still recommend 1-2 grams of supplemental fish oil per day for most adults but you should always discuss any dietary supplements with your physician to be sure there are no conflicts with other health factors and medications you may have.
1. http://www.sciencedaily.com/releases/2011/10/111027083043.htm
2. http://www.sciencedaily.com/releases/2011/10/111030151549.htm
3. http://www.sciencedaily.com/releases/2011/10/111031154134.htm
4. http://www.sciencedaily.com/releases/2011/10/111025135931.htm